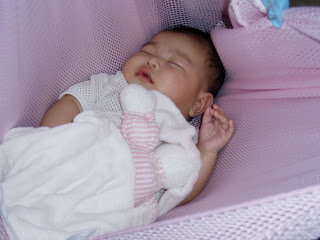 I wrote previously about what a big bully Elyssa can be. After some analysing, I think one of the reasons she's in that cranky state (besides just being a plain bully to mummy & daddy) is when she doesn't get enough sleep. My parents say that Elyssa normally sleeps for 2 hours in the afternoon. She doesn't do that on weekends!

So, I decided to take down her daily schedule from my mum so that I can replicate it during weekends. (actually, my mum rattles-off her daily schedule on a daily basis, but it was only a few days ago that I actually sat down to record it.)

Elyssa's daily schedule:
8.45-9.00am : Arrive at my parents place. Short playtime on the mattress to cool down.

9.05 - 9.10am : My mum will give Elyssa her bath, then her milk. After that, my mum will put her in the “sarong”. She’ll play for about 5 to 10 minutes inside. When she cries, my mum will rock the “sarong” until she falls asleep. She’ll usually sleep for half an hour only, with a max of 45 minutes. When she wakes up, mum will give her water then place her on the bouncinet.

12.15-12.30pm : Milk time, followed by same process with the “sarong”. She'll normally sleep until about 3pm. During this time, my brother's Cambodian maid will be stationed there, to rock her when she wakes up. This is also the time that Justin (her 2+ year old cousin) and my parents nap.

3.30pm : Milk time. After milk, she'll happily sit on the bouncinet and watch the activities in the house – my parents singing karaoke, my mum playing the piano, Justin running about etc. She’ll cry if she can’t see anyone.

6.30 : Milk time. But if I can be home by 7pm then my parents will defer milk time a little so that I can breast-feed her.

My parents say that her routine is quite fixed. She'll be cranky half and hour before her milk time, but otherwise she's a happy baby.

So nice, you mum stays near your place? Hmm, you send her over so late... what time does work start for you?

Yeah, have not been that early at work. Advantage of flexi hours + being in between projects! Gonna be busy from next week onwards tho, so will hafta adjust timing a bit.

Elyssa's routine is almost the same as Baby C's. My baby doesn't nap long too.