Elyssa can be such a sneaky / cunning little girl sometimes. 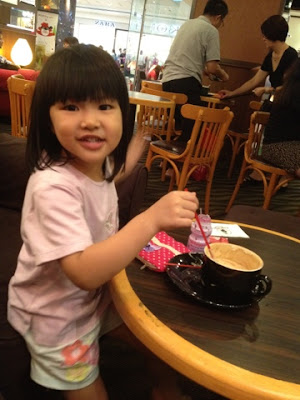 Scenario 1 – Ipad
She loves watching utube on the Ipad. One day, she was watching Barbie – Princess and the Popstar music video.


BUT once the video clip reached almost the end, she used her finger to slide the slider to almost the beginning of the video so could watch again. She did this OVER and OVER.
Me : Elyssa!!  Time to stop!
Elyssa :  But video not yet finish.
Me : ????!!!!!


Scenario 2 – Time
I was trying to force her to nap in the afternoon. She kept coming into my room every 5 minutes saying she “finish sleeping already” 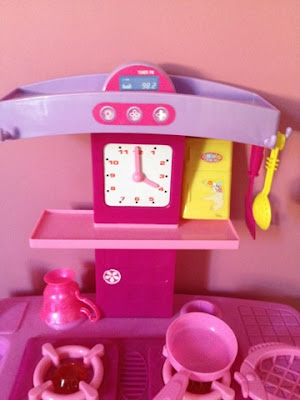 Scenario 3 – Hair Cut
Few months ago, my mum gave a hair cut to all the kids.


The next round of hair cut:


There are other scenarios as well, where she goes around the issue/ forbidden item. Or she will talk and talk to justify her actions.


Like when I scolded her for not sharing her new toy. (unacceptable behavior). I threaten to never buy new toys for her again bla bla bla.  She talked and talked and finally explained that she didn’t want to share the toy on the first day.  She said after the first day, she will happily share with others. (well, this doesn’t sound so unacceptable eh?)


All this is sometimes annoying especially when just talks and talks until she comes out with a good reason. But hubby said at least we know this girl can survive in the sneaky corporate world !
Posted by Adrine at 9:44 AM 6 comments:

We braved the Big Bad Wolf Sale 2 weekends ago.
Reached there around 7pm on the first Saturday of the sale. It took quite a while to reach place (when we were almost there, there was a Rela policeman blocking entry to the sliproad. He just asked us to "u-turn kat Petronas" but there were no signs at all when we reached Petronas. Blindly followed a few cars and thankfully they were going to the same place. Phew!)
Once there, we were pleasantly surprised that it wasn't too crowded - 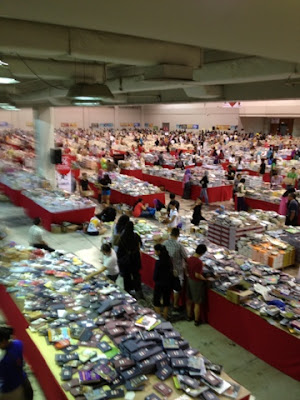 We decided to drop Erin off at the play area with our maid (Elyssa was in Singapore that weekend). Not cheap at RM10 per hour. Erin LOVED it though!!  I checked in on her a few times and she was just so engrossed with the play equipment. 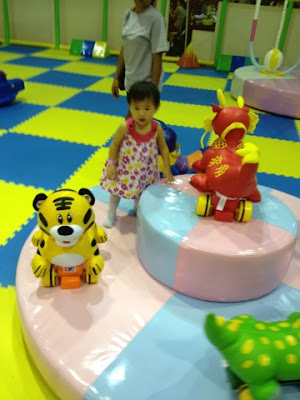 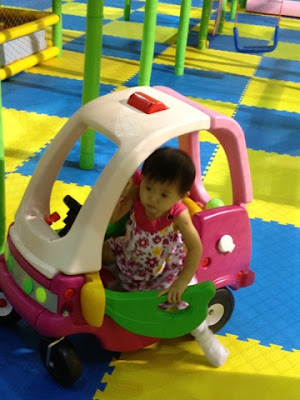 Without any kids tagging along, we could shop in peace. Yay!!
Graphic Novels (fancy name for comics!). Hubby's FAVOURITE section.
I think about RM20 each but he said it's sooo cheap cos normally it can go up to RM100. 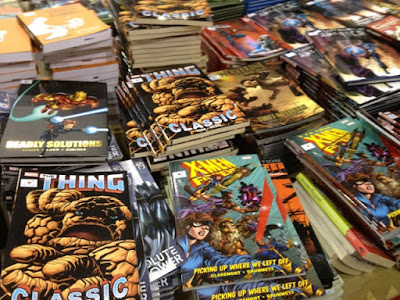 The stroller came in handy  :-) 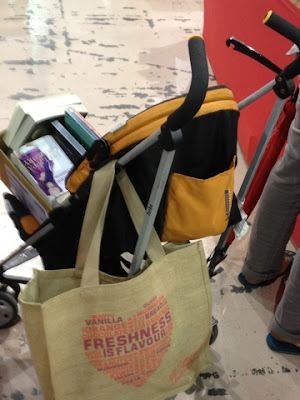 I didn't really go crazy like previous years since I'ld rather use my precious free time to sew rather than to read. And Elyssa's book cabinet is already full of lovely books bought previously. (Popular Warehouse Sale, Big Bookshop Warehouse Sale, Big Bad Wolf Sale, good deals from Book Excess etc etc). Why do I even bother going to this sale???  Err....kiasu I suppose since everyone also went. He he.
Mummy, buy this book for me ok?
Easter Egg Board Book for only RM3  :-) 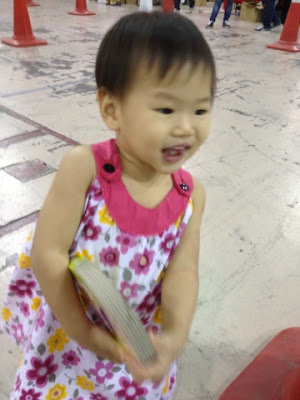 Not really clear from the picture above, but the red cones shows the empty payment section. We didn't even had to queue at all. My colleague exclaimed in envy when I showed him the photo.  Why? Cos he went on Friday night around 11pm and had to queue up more than 1.5 hours to pay!!! He said the queue was from the payment counters right up to the END of the huge hall. At around 3+am onwards, no one could even browse for books cos the standing area was occupied by people in the queue. Yikes.  Somemore, just when it was his turn, all the credit card terminals became offline. Double Yikes!
ps: Dress looks familiar?  Yup, that's the dress I made for Erin. She refused to take off the dress after I tried it on for her that morning.    :-)
﻿
Posted by Adrine at 9:49 AM 5 comments:

Another sewing project to update :)
Dress # 2 for Erin
Tutorial from here: http://prudentbaby.com/2010/05/baby-kid/snappy-toddler-top-free-downloadable-pattern-2/ 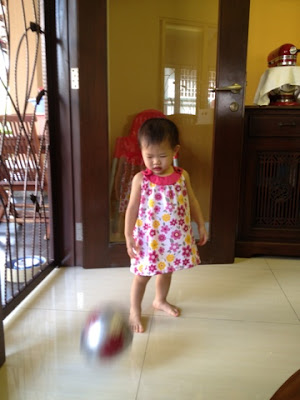 Back View of Dress 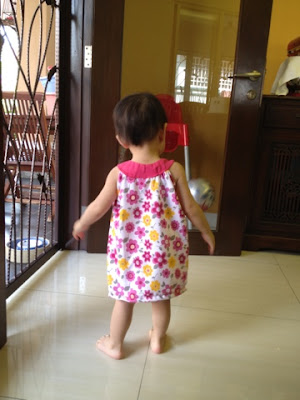 OMG....... I am pretty pleased with myself!!! Yay Yay.  *dance around in glee*
Even hubby couldn't quite believe I made this!
Material is from my previous purchase in Kamdar. RM8+ per metre for the flowery fabric and RM4+ per metre for the plan red fabric. I loved how the colour combination turned out. So bright and cheery :)
I'm glad Erin liked it too.  She willingly changed into this dress but when I wanted to take it out later  (cos haven't even washed the fabric yet) she screamed in protest.  Ke ke.
"Mummy, enough photos already.  Time to play ball" 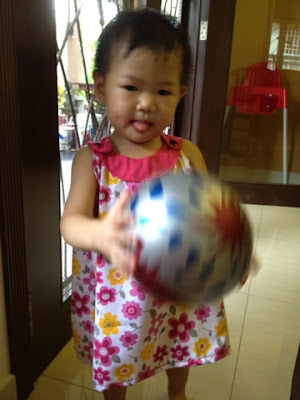 Easy Button Collar
Good for beginner like me since I don't know how to sew zips yet. 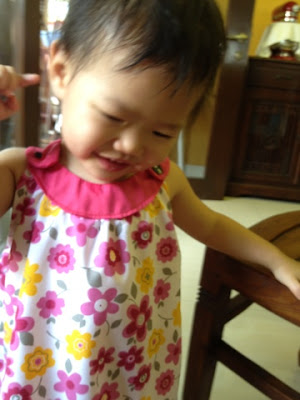 I never knew sewing could be so satisfying!! These days, I can hardly wait for both girls to sleep so I can run to my little sewing corner. That's usually around 10pm and I get to squeeze in just over an hour of sewing time on a normal week day. A couple more on weekends but usually there's other stuff going on. If only there's more hours in a day!
Posted by Adrine at 5:09 PM 10 comments:

Exercise Session Last Weekend:
"Daddy, Back Leg Must be Straight" 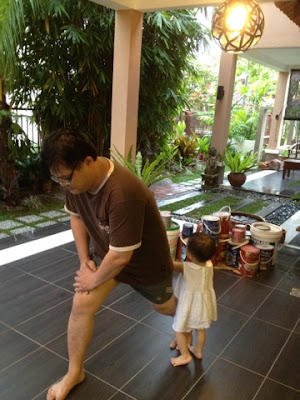 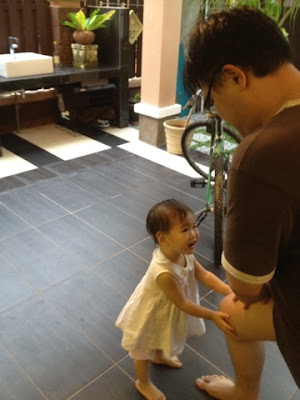 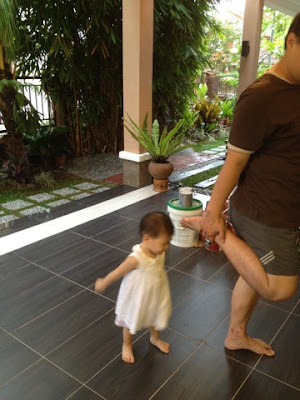 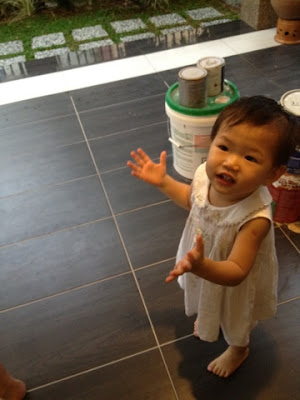 He he.....who wants to hire this little Exercise Instructor??
Posted by Adrine at 4:14 PM 3 comments:

Elyssa is in Singapore now! 2d,1n trip with my SIL, MIL and my 2 nieces. And from what I heard, she is having a blast & not missing us at all.

Got this photo via whatsapp from my SIL. Elyssa with her 2 cousins, taken at Orchard Road: 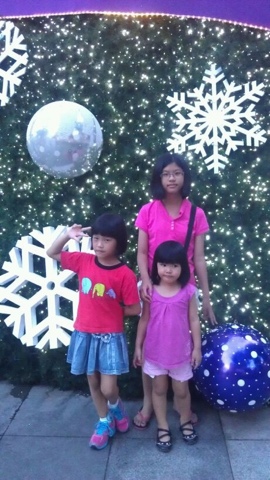 2 more sewing projects  :)
Project #5 - Curtain Tie Back for Elyssa's Room
We used curtains from our old house but somehow couldn't find the curtain tie backs even after searching high and low! Hubby even went out looking for a simple tie back to buy but couldn't find anything suitable.
I ended up making a simple tie back out of an unused bolster case cover. Added a DIY five petal flower made of Grosgrain Ribbon and done!!!
Elyssa requested to add 3 more flowers (2 purple, 1 pink) but won't that be too much??  But see la...since it's her room, I may just add more flowers for her this weekend. 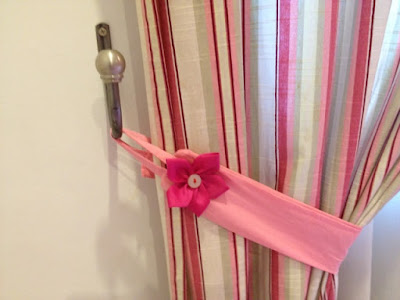 Next project was a simple dress for Erin. This time, I went fabric hunting again. Drove to Yee Button House in SS2.  They have lovely cotton fabric but at RM45 per metre, I thought it was wayyy too expensive. (since I may end up butchering the dress anyway)
I walked over to Kamdar and was pleasantly surprised to find pretty decent fabric at a fraction of the price. Ended up buying 3 pieces @ RM3+, RM6+ and RM8+ per metre only.  Yay.  Cheap, cheap for my experiments.

Project # 6 - Simple Dress for Erin
Ta da...... my very first dress!!
This is from the RM6+ per metre fabric. I bought a metre but I think I probably used up only a quarter or maybe less. OMG that's less than RM2 for this dress!!!  Ok..mebbe add another RM1 for the ribbon and elastic band.
Super love it!! 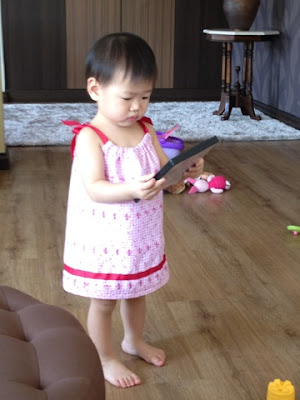 Back view of Dress
Tutorial Link : http://www.babyrabies.com/2012/07/a-refreshed-pillowcase-dress-tutorial/
Ok gotta admit there's rather atrocious uneven sewing around the sleeve area. Really need to improve on that.  But for now, what the heck - my little model doesn't know how to complain yet  ;) 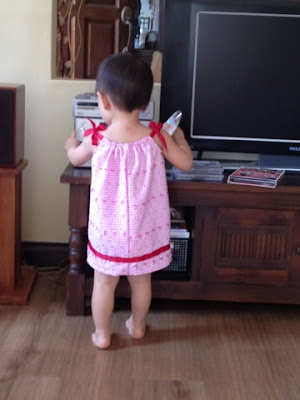 I've found another simple dress tutorial that I want to try out.  Hopefully will have time to cut out the fabric tonight after Elyssa & Erin sleeps.      : )
Posted by Adrine at 11:57 AM 5 comments: