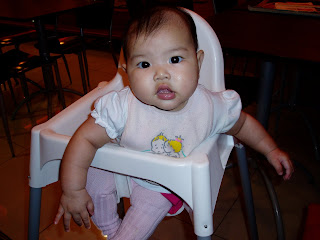 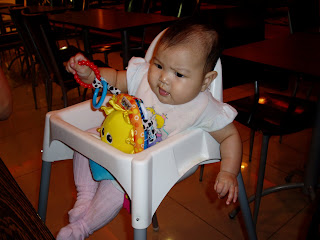 "Nevermind..... I"ll just play with my own toy"
Yipeeee...... Elyssa can finally sit on the babychair!!! I never tried it earlier cos I always thought the chairs were for bigger babies (unless it's those special babychairs). So when we were at Ikano yesterday and the waiter pulled out an Ikea babychair, my immediate response was my usual "no need". But then after a second thought, I decided to just give it a try. I was pleasantly surprised that she could sit comfortably in the babychair! She really seemed to enjoy sitting on the chair all by herself.
.
Was also happy that I finally found baby leggings for her. The only ones I could find last time were expensive ones from Mothercare. The one at Ikano was only about RM13 each. (yeah, cheapo mummy). So, at least I don't have to worry about her being cold when I dress her up in skirts and dresses next time. :)
Posted by Adrine at 4:53 PM