8 days to Elyssa's party celebration in school and I'm almost done with her party packs!  Yay.... an achievement for a last-minute person like me. Last year, I started only 2 nights before the actual party. ke ke.
I was really thrilled when my friends introduced me to a shop that sells stuff (mainly junk food) in wholesale packs. They mainly sell to sundry shops so the prices are rather low. Eg: a packet of assorted 20pc stickers only costs RM10.  That works out to only RM0.50 each.  The cheapest I've seen outside for this similar sticker is RM1.00.  A small pack of mini junk food costs about RM0.17 each.  I wished I bought a bit more!
Party Pack Stuff 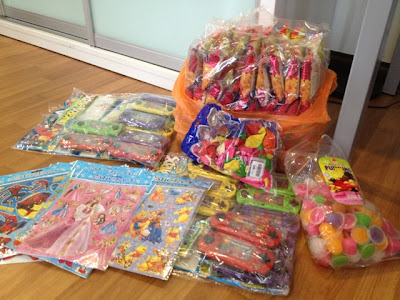 Just like last year, I decided to personalise the party packs. After all, I need to have boy-ish and girl-ish packs anyway. (so that boys don't get Princess stickers and girls don't get Spiderman stickers).  So might as well go the extra mile to personalise for each of her classmates.
Elyssa was happy that she got to choose what goes to which friend. For each pack, she had to select 1) type of sticker  2) colour of Angry Bird game  3) 3 jelly cups.  She liked to explain her selection. eg :
-Give Dora sticker to XX.  Because she has a Dora bag so she must like Dora.
-Give Ultraman sticker to YY.  He always likes to do Ultraman pose in class.
-Give pink jelly to friend ZZ.  She likes everything pink.
Good to know she's observant in class.
"Ok, he gets the purple game"
I just fished out last year's post on party packs for her 4th birthday. Coincidentally, she's wearing the same blue Hard Rock t-shirt and has the same hair-looks-like-a-mop-and-need-haircut style! 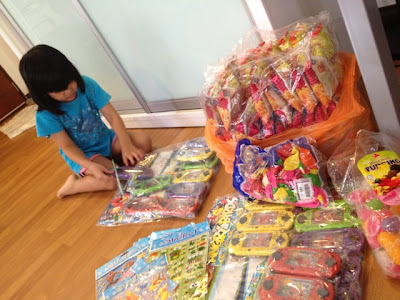 Ta daaa....... some of the completed packs.
The bags are leftovers from last year's pack. Initially, I wanted to tie a ribbon at the top just like last year. But the bulky junk food didn't leave me with much space at the top. So I decided to staple the top with thick paper (colourful file dividers which I had). For the labels, I got some graphics from the web. Did some tweaking in Excel, added some words and that was it. I was pretty pleased with the results.  I think it turned out better than last year's version. :-) 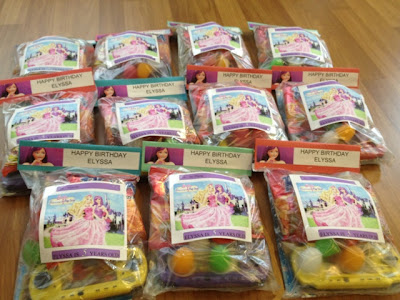 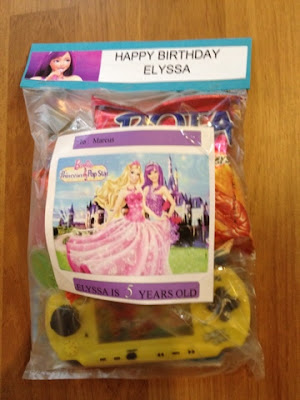 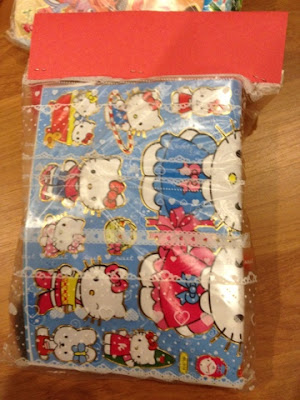 Wow that's a very big pack. You are so generous.

Calvin kindy was about 60 students, so I have to have a better budget and small party packs.

wow...such a big party pack...the kids must be super happy.

Happy Birthday to Elyssa in advance.

Oh that reminds me I need to do this in the next two weeks too coz William wants to have his birthday celebrated in school too, haiyaaa... ok ok, anything for the kid, right? Can you pm me where is this shop? Thanks muchie!

Angeline - 60 students is the whole kindy? I am preparing just for her class. About 20+ pax. Everything costs me about RM70 only.

Irene - The shop is a few doors away from Hong Leong Bank (Jalan Othman) in PJ old town. It's those old type of shop. My friend said there's another place diagonally opposite that has even more stuff (made up of small stalls) and slightly cheaper. But I haven't been there.

wahhhhh so many party packs to prepear...omisg

well done! I'm sure all the kids will be very happy :) I've just started on Pumpkin's packs for her party in May.. haven't decided what to put in yet though ;p

good job to mommy! those party packs are very nice :) you must have used a lot of ink on your colour printer huh?

Irene - sorry! It's the same row as Public Bank not Hong Leong bank. Few doors away from Caring Pharmacy.

Went there just now cos Elyssa told me she has two new classmates. I bought ngam-ngam last time!