After breakfast on Day 2, we set off to the Caversham Wildlife Park. Yay....gonna see kangaroos, koala bears and wombats!

Train Ride to Bassandaen
I always like the experience of taking public transport in a new place  :)
After the short train ride, we took a connecting bus to Whiteman Park and then a courtesy bus to Caversham itself (within Whiteman Park). I was pleasantly surprise that public transport tickets were valid for 2 hours from time of purchase - so can hop on train, bus and even ferry during the time frame. But we wrongly thought we qualified for the AUD 1.60 conccession fare instead of the full AUD 4.00 fare.  Oops! 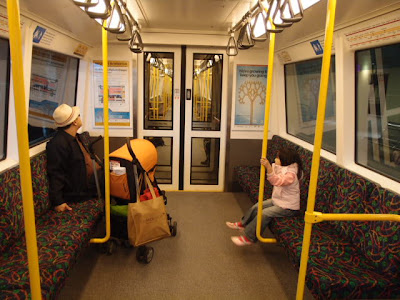 At the entrance of Caversham Wildlife Park 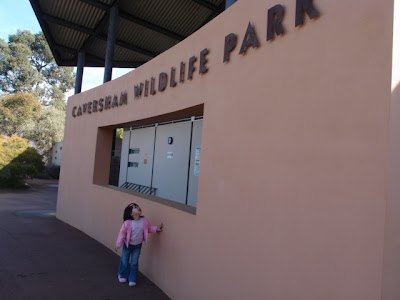 A REAL kangaroo!
I think there were easily 30 kangaroos in the kangaroo enclosure area. 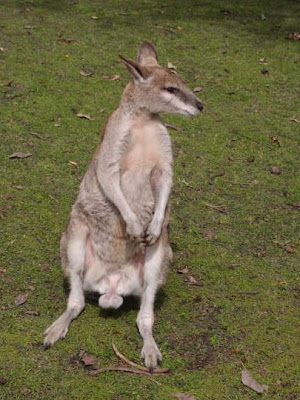 Elyssa feeding a kangaroo with daddy 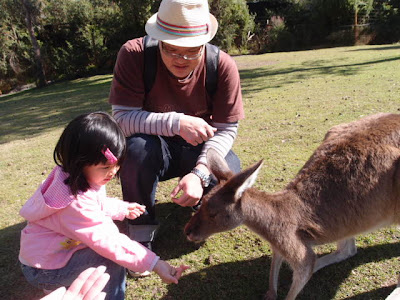 Eventually, she was comfortable enough to feed the kangaroo by herself.

We spent a fair bit of time at the kangaroo enclosure. 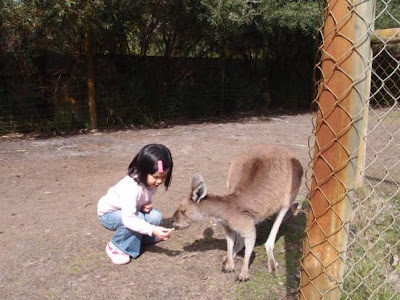 Next attraction - koala bear!
Well, technically a marsupial instead of a bear. This fella was fast asleep. 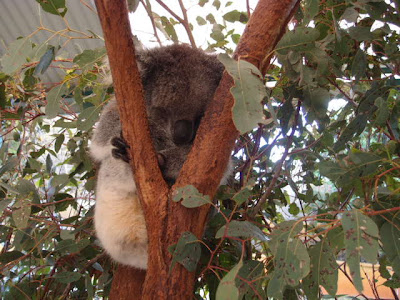 Me stroking the soft fur of the sleeping koala
Wake up Mr Koala! 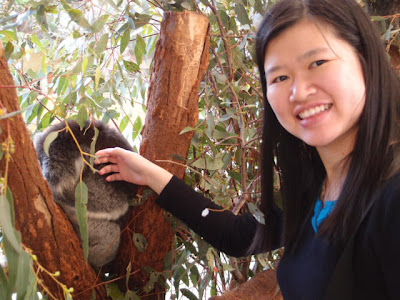 At least this koala was awake 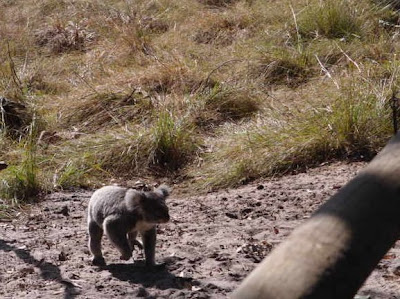 Looked at some owls and and other small animals, then we stopped for lunch. We packed tuna, cheese and ham sandwiches, yoghurt, crisps and a flask of hot coffee. At first I was wondering where to eat - saw some tables next to a cafe but they were marked "for patrons only". Then walked a few steps down and saw a designated picnic area complete with rows and rows of tables and benches!  Lovely!

After lunch, we continued walking around the wildlife park.

Photo op with a Wombat 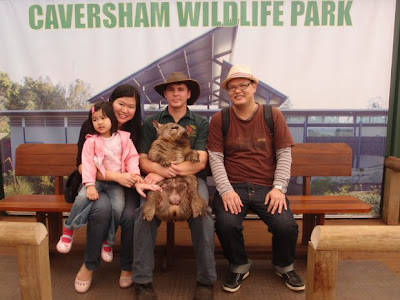 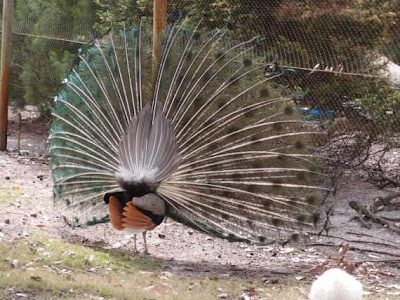 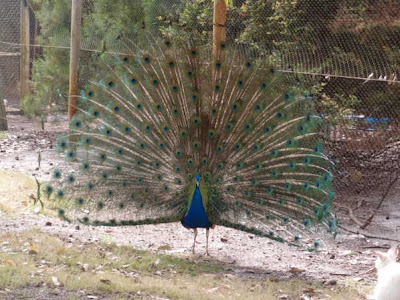 At the animal show 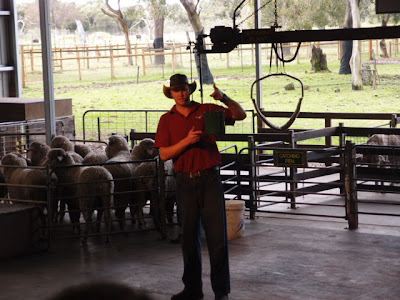 That's a live sheep that's being sheared!
I've always thought that the poor sheep must get really cold after loosing its fur. But the guy explained that sheep automatically produces lanolin oil (the same lanolin in some skincare products) after shearing which keeps it warm. So that botak-ed sheep can go back to the open fields even in winter. 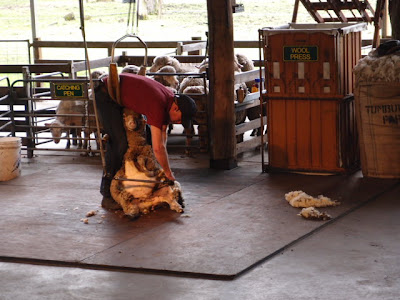 After the animal show, Elyssa had fun feeding rabbits 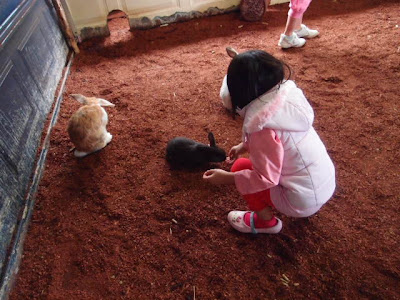 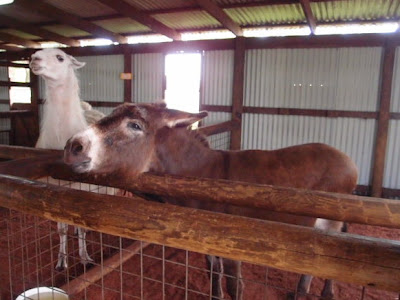 Me with a goat
I can't believe I actually hugged a goat!! 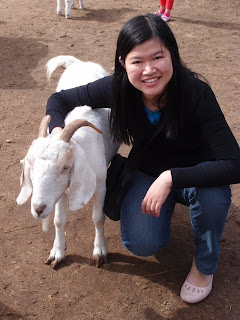 Elyssa went around the place looking for "good goats". To her, that means any goat that doesn't move when she strokes it  :-) 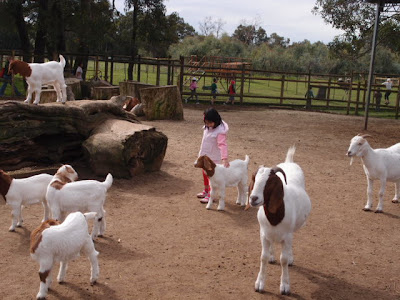 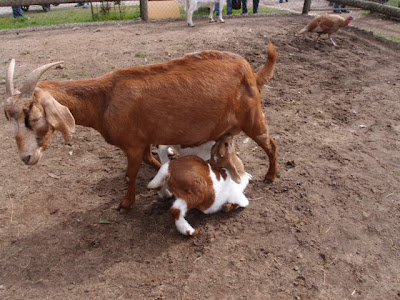 Elyssa with a "good goat" 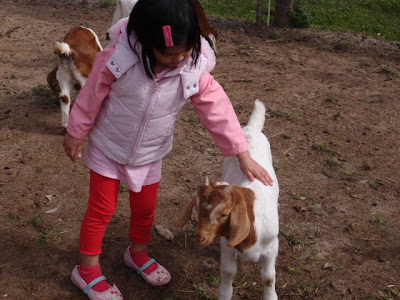 Lovely Weather to Run around 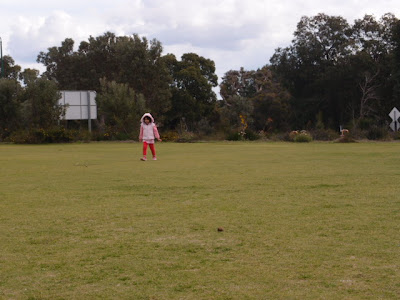 We took our time at the park and by the time we left, it was around 3+pm.  Heard some rather interesting conversation (which involves swearing in almost every sentence) in the bus on the way back. Well, one plus point about public transport is we get conversion snippets from day-to-day life of non-tourists.

Anyway, when we arrived at the city centre, we shopped around a bit -  went to the pharmacy, Hubby did his pre-requisite CD shopping while I brought Elyssa with me and happily browsed through practically every aisle in Woolsworth.   Yes, I can get high on grocery shopping. Even using the self-checkout counter was such a thrill  :-)

When it got dark, we took the free Red Cat bus back to the hotel.

Please save your itinerary for me. I might need it next time =)

Very nice trip you've had. Elyssa's such a lucky girl! Baby was left behind? Bet you missed her terribly eh?

Looks like elyssa had a ton of fun! Wish n was able to enjoy our trip last. I love to walk around the groceries store too and compare stuff. If I knew u were going there I would have recommended u to get some Rafferty garden's purée pouches for Erin and maybe elyssa too. N loves their purée pouches and my friend highly recommends their chocolate pudding (I forgot to ask my aunt to get some for me cause she's visiting from aust!).

Woo, my son definitely love this place. Hubby did plan a trip to Aussie, but still planning...bila nak pergi ni.

Rachel - will put it up in the blog, so I won't forget too!

Kathy - it sure was.

Melissa - Rafferty puree pouches. thx, will take note of it when,if I return!

Chi2 - there were plenty of "naughty goats" that day. Ha ha...probably chased by plenty of kids in their lifetime!

Angeline - ask your hubby to cepat-cepat plan! or better still, you plan la!