On the weekend of her 4th birthday, we brought Elyssa for her 4 year old photo shoot. We did the same for her first and second birthday. We skipped it for her 3rd birthday and I totally regretted it :(

This time, I bought an online voucher from MyDeal (RM38 only but need to add RM15 for soft copies).

No own photography allowed in the actual photo studio, but I managed to take these photos before entering -


Elyssa having her hair done
I suddenly visualised something when I saw that - her wedding day!!
OMG! Grow up slowwwly, ok? 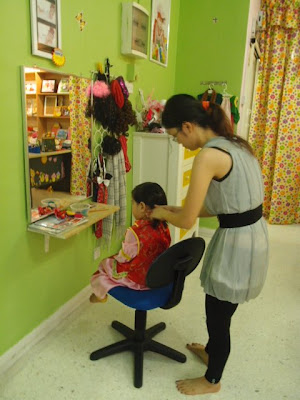 Putting on the Finishing Touches 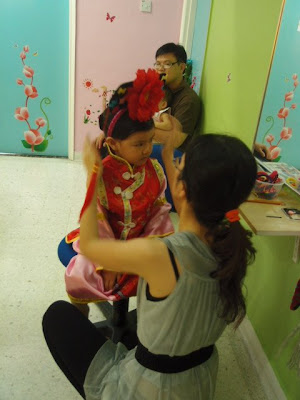 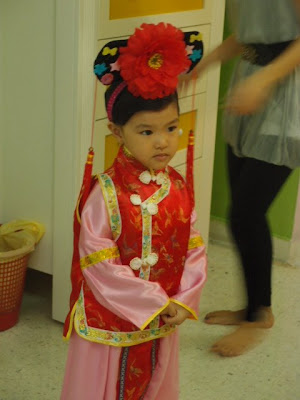 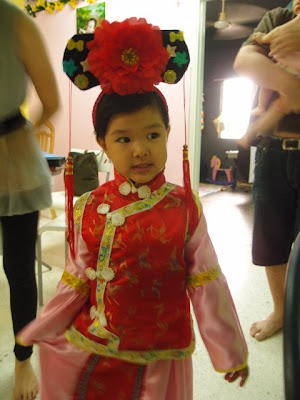 She hardly smiled during the photo shoot tho. Either a mini smile or a very fake smile. Unlike the previous 2 sessions, all the "jiak! jiak! smile!" / bribery/ silly stories didn't work.

Well, we consoled ourselves that the serious look is her "playing the character". After all, an imperial chinese princess is not supposed to grin like a monkey rite? Supposed to be composed and serious mah.... ;)

We chose 6 poses in the end (topped up a bit of $$. Can't recall amount but total was still below RM80). They need some time to do touch-ups so we'll only get the printed photos and soft copies this weekend. I can't wait !
Posted by Adrine at 4:11 PM

Exciting! I remember her 2nd photoshoot with the Korean hanbok :) time sure flies..

haha so adorable! cant wait to see the photos too :-)

can't wait to see those pictures.

Wah super cheap! Include hair and costume some more.

awww..what an adorable princess. she looked so pretty in the costume. hey, mommy's visualization has gone a bit too far...hahhhhahaa

That is such a good deal! Like everyone else, can't wait for the pictures of your little imperial princess!

So cute! Wow, so you plan to have a studio photoshoot every year on their birthdays? That's a very good and priceless b'day pressie!

Princess Elyssa is so pretty. What a great deal. Can't wait to see the pics.

Is been a while I did not see Elyssa's photo, she has grown up so much! Leng loi:-)