Wednesday morning did not start off well for me. I woke up slightly later than planned cos baby Erin was feverish and wanted to nurse many many times thru the night. *yawn*. Anyway, I quickly got Elyssa ready then drove her to the kindy, promising her I'd be there later with the cake and party packs.
Came home and that's when my problems started - the night before, I baked the cakes in 2 separate tins, let's call it Cake A and Cake B.
Problem #1: the butter wrapper that I placed at the cake tin base somehow got embedded to the bottom portion of Cake A. So when I pulled out the wrapper, huge chunks of cake came out as well. Yikes!
Problem #2 - both cakes rose beautifully this time, which resulted in dome shaped cakes. (I should have sliced off the dome part but at that time I was worried that I might end up with not enough cake due to Problem #1).
I went ahead with frosting the cake which was an absolute disaster! The 2 parts just won't stay in place! I tried all combinations - A on B, B on A, invert A then put on B, invert B then put on A.

Bleah! The clock was ticking away. Imagine this - I was still struggling with a huge mound of chocolate mess at 8.30am and I was due to leave my house around 9.20am. I just couldn't show up without a cake! No way I could buy a cake either cos the cake shop opens at 10am. *stress*

In the end, I just slathered lots of frosting on both parts of the cake, decorated it, chucked the whole thing in the fridge, hope and prayed the whole cake won't collapse, went for a super quick shower (I had chocolate all over me!) then drove to her kindy again.

I reached her classroom just before their break time. Elyssa was thrilled to see me! By then, part of the top portion of the cake had slid down! I pushed it up and hoped that it would stay for juuust 5-10 minutes.

Elyssa with Mummy's Ugly and Might-collapse-anytime Cake
I was a little worried what Elyssa and her classmates might say. But they just went oooh over the princess icing, the chocolate frosting and smarties. Kids! Bless them :) 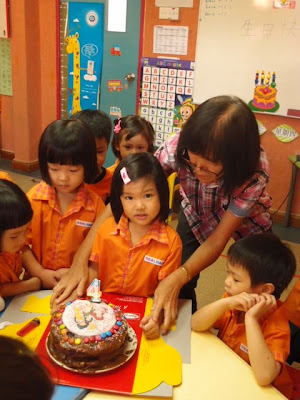 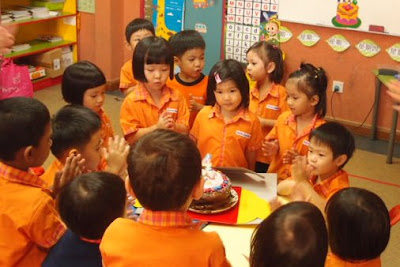 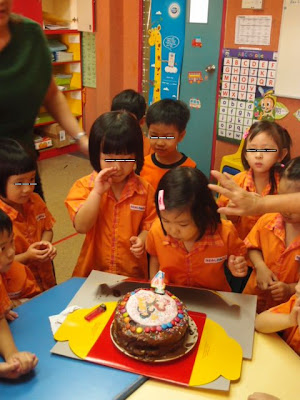 With Mummy in the photo
Elyssa couldn't wait to cut the cake. Luckily, the cake did not collapse. Phew! 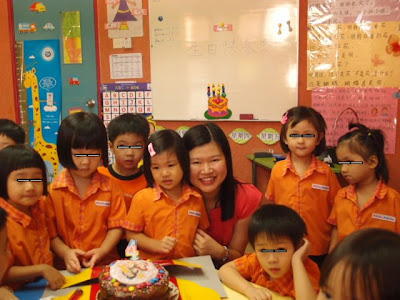 Close up shot of the Chocolate Cake
After all the drama, it was actually a very yummy cake! Almost the entire class asked for extras. The interesting thing was the teacher taught them "besar and "kecil" for "big and small" just that morning. So, for the extra piece, the teacher asked the kids whether they wanted "besar" or "kecil", and they were happily shouting "BESAR! BESAR! " He he..... I was happy!! 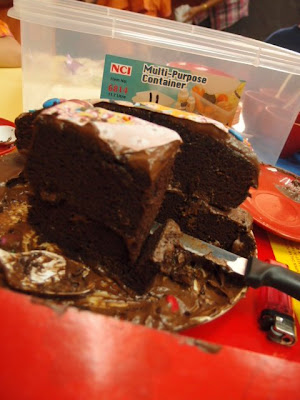 After eating cake, Elyssa distributed the party packs to her friends. (no photos cos I was helping her) 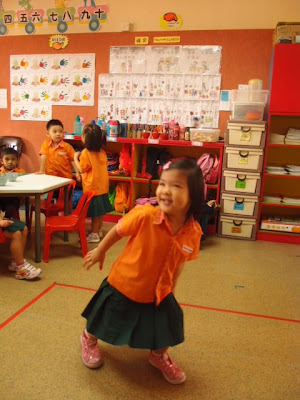 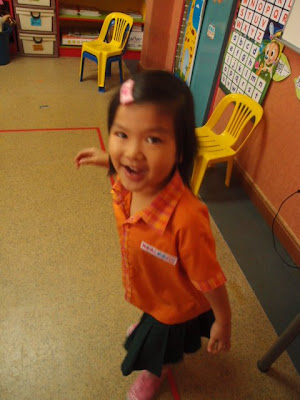 Self-taken photo of Elyssa and I 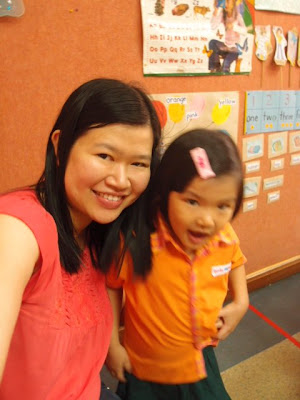 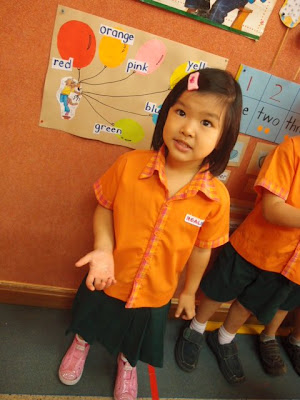 Some of her classmates wanted photos as well -

3 girls and 3 boys. See how differently boys and girls pose! 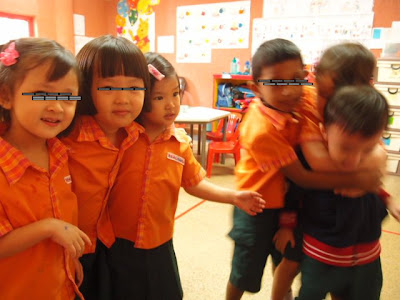 After all the planning and execution, the party was over in less than 30 minutes! Hah!


Anyway, since I was on leave that day, I promised to pick her up from school (something she had requested before) and to bring her and cousin Justin for lunch at KFC.

The cousins at KFC 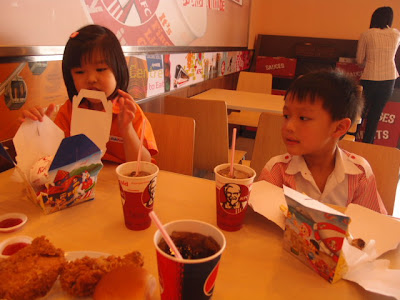 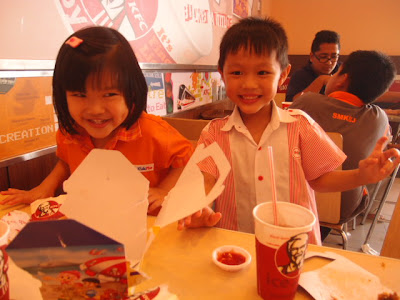 Elyssa kept saying "Thank You Mummy', "I am so happy" that day. It was an exhausting experience for me but definitely a rewarding one as well.

Happy 4th Birthday my princess!
Posted by Adrine at 9:40 PM

happy 4th birthday to her too! we'll be having one in our girl's preschool in about 2 weeks time too heh.. first time! so excited ;p

Bravo mummy for all the great effort.. all we wanted is the smile on the child face hoh... hehee... Happy Belated Birthday to Elyssa!

wow what a morning but U MADE IT! *clap clap*

Elyssa u are such a lucky girl!

It looks like a beautiful cake!!! You must be exaggerating! The cake looks so yummy makes me want some now!!

I think over here we cannot bring home bake good to school cause they are afraid that the kids might get sick. I heard we can't even bring the cake to the restaurants! Not sure if that's true or not.

OMG..I was keeping my fingers crossed while reading your post..haha. Well done, your cake turned out so nice. :) Nice self portrait of Mummy and Elyssa.

Me also want besar if got leftover...sigh...looks like everyone makan all already

Wow you make so mnay burfday cakes! Nice and Elyssa must be very happy about it

Hi I’m Heather! Please email me when you get a chance! I have a question about your blog. HeatherVonsj(at)gmail(dot)com

Don't see any dome on the cake in the pics... aiyoo what a stressful morning.

Nic last pic of happy E and J at KFC.

happy belated birthday Elyssa!! ya, quite stressful for you, lucky it turned out ok:)

Happy belated birthday to your princess. She looks A LOT LIKE YOU!

wah...u bake on her important day ah?? Its always something i would chicken out on this auspicious day :)

She is really good girl, at least she knows how to express her appreciation to you by thanking you.
For Sarah, sometimes I have to remind her the nice words, alamak!

Soo ngam, you and the kids were wearing orange shirt:-)