Last weekend, we attended a neighbourhood mid-autumn celebration.
.
Elyssa was excited when I told her we were going to attend a "TangLong Party" :)
.
Hubby was excited too - when we were doing grocery shopping the night before the celebration, he suddenly decided he wanted to take part in the Homemade Lantern competition. He bought a big bottle of mineral water, some crepe paper and double sided tape then happily started his project that night.
.
And this was the final outcome of his project -
-
-
-
-
-
- 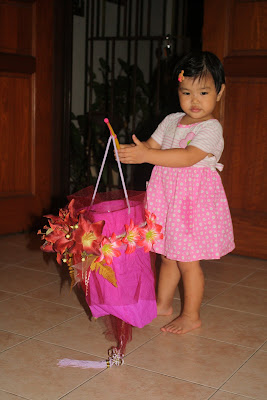 Not bad eh? Other than the 3 items he bought, the rest were recycled items like flowers and netting from an old fruit basket and decoration from an old mooncake box. Side note : I hope Elyssa got her daddy's creative and artistic genes! And not mummy's "draw cat, but don't look like cat, draw dog but don't look like dog" genes. Ha hahhhh !!! Meanwhile, I've appointed hubby as Elyssa's Artistic Director :)
.
.
The "TangLong Party" that night started with a walk around the football field with everyone carrying their lanterns. Quite a big turnout -probably around 100 people. It was a pretty sight indeed. No photos tho since we had 3 lanterns among the 3 of us (one with a real candle so we had to be careful) and I had to hold Elyssa's hand cos we were walking on the pavement by the side of the road.
.
.
After the lantern walk, it was back to the basketball court for FOOD ! There was plenty of good food (mainly pot-luck from residents) such as roast lamb, satay, fried beehoon, fishballs, curry chicken, jellies, nuggets, yamcakes, chocolate cakes etc.
Some photos -
Elyssa with her lantern.
She preferred the lantern that my SIL bought rather than the one daddy made for her. I think cos this one is lighter. 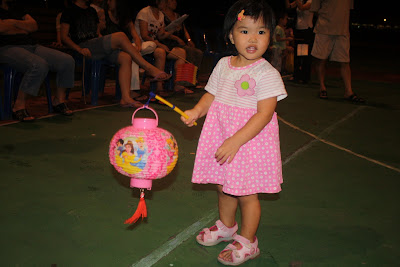 Elyssa with cousin Justin koko. My bro + family came slightly later than us so we didn't walk together during the lantern parade 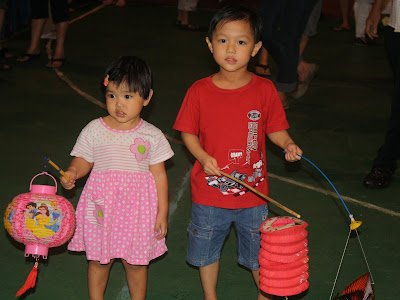 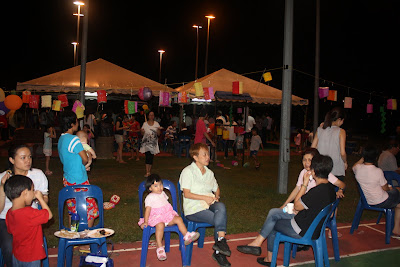 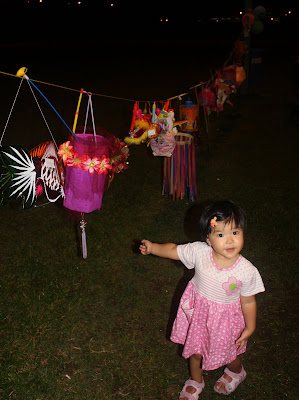 After everyone filled up their tummys, there were activities for the kids followed by a tai-chi and line dancing session. Elyssa joined in for a while only. She wasn't in a particularly good mood cos she only had a short 20 minute nap the whole day. She didn't cry but she didn't want to participate in any of the activities. Not even dancing with "Ah Mah" during the line dancing session.

One of the games for kids. Ha ha..... how come the "Ah Mah" looks like she's enjoying herself more than the 3 grandkids?? 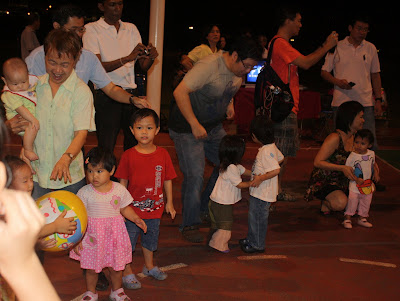 We hung around until it was time to announce the results of the Lantern Competition. There were plenty of consolation prizes with 2 main prizes - Most Creative Lantern and Most Beautiful Lantern. The Most Creative Lantern prize went to a young boy who created a beautiful hexagon shaped lantern using old egg cartons.

Hubby and Elyssa receiving a hamper from the VIP that night 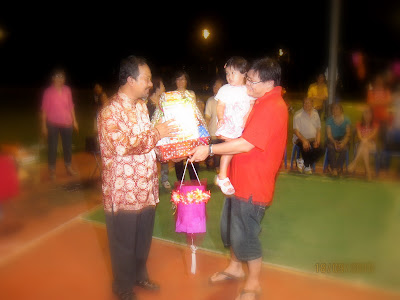 Overall, a very well organised event indeed! I heard that discussions have already started for next year's event. I'm looking forward to it!

Wah so enjoying....i like this kind of function hwere everyone can really join in...

Happy Mooncake Festival to you Adrine

Angeline - Wah.... so fast, I was still editing when I saw your comment!
Happy Mooncake Festival to you and family too !!

What, you won?? Congrats to Johnny! I will never never think can winning such competitions! Main prize some more!

Whole event looks so good. Maybe next year I will gatecrash. :p

Wow, your hubby is really creative. Good job and congratulations :D I guess the lantern will be hanging in your home till next Mid Autumn Festival? hehehehehehee

Wow...congrats to your Hubby. He is really creative. He won means he is really good. That statement "draw cat, don't look like cat" applies to me too..haha.

Bravo to daddy for making the Most Beautiful Lantern of the night! We seldom (never, actually) take part in neighbourhood parties like this. Too malas haha :p

Your hub is very creative. I wish to make a lantern for my kids, too late for this yr, haha.. Will try next yr! haha

wow..your lantern really stands out!! It's awesome!! Me love everything home made and stuff made from scratch!

How nice if my housing area have this kind of gathering. Very fun.

I like the lantern. And wow...ur hubby is really creative. Surprising for a husband to want to participate in this...

now very seldom see neighbourhood organise such gathering already. must be fun for families with kids there!

Wow! Your hubs is so thoughtful! The lantern looks so nice!

wow congrats on winning on the lantern making competition. Didnt know ur hubs is so creative and artistic.