After work each day, my parents will report how Elyssa has been that day. For the past few months, it has been along the lines of "She was a GOOD girl today except she cried a little when it was time to sleep" etc.

But for the past week or so, Elyssa has been getting plenty of "red marks" on her "report card". Here are some of the complaints -

1. She'll protest a lot when it comes to bathing time. (A little surprising since bath time has never been a problem before and there was no change in routine) These days, she'll start screaming and rolling on the floor when it's time time to bathe. If she's carried to the bathroom, she'll sit down on her bare bum bum and wail on the bathroom floor!

2. Very territorial at times. If she's reading a book and cousin Justin comes close (just close, not necessarily touching the book) , she'll scream and push him away.

3. Very aggressive when she doesn't get her way. Once, she was trying to get down from the chair while facing forward. My mum tried to adjust her to a safer position to get down. She didn't like it and starting the screaming routine on the floor. Another time, she was playing with a toy and someone took it away from her. She started protesting, but when the toy was returned to her, she just angrily threw the toy on the floor.

*Sigh*...... there's actually a lot of other scenarios as well. The fierce side of her is nothing new, but just that it's happening more frequently than it used to.


The thing is that when she's happy, she's very happy indeed. She'll go around babbling, smiling and flashing her sweet little dimples. All the protesting & screaming happens only when she doesn't get her way. Can't give in her all the time, so there's bound to be a few meltdowns a day. Maybe she's at the stage where she wants to assert her own view of things. (It feels like she's saying its MY way or the highway)

Gosh, I dare not even imagine what the Terrible Two's will be like.

Some of the crying moments - 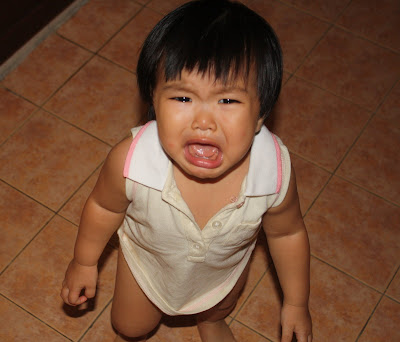 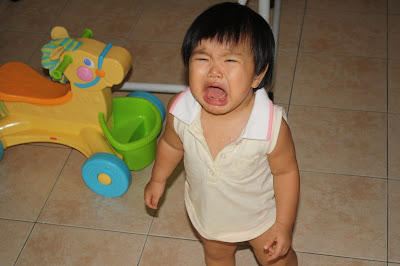 from the pics, can tell elyssa is crying very loud!! anyway, shan rae is also like elyssa for item no.3!!!

hhhmm... u better prepare yourself for the worst... it'll get tougher when she's older (ard 2-4yo unless u tame her before she reaches primary age)... btw, r u strict? i believe in discipline... of course once the kid is older lar ;)

Jas - this girl can really scream!

Irene - Yup, I'm bracing myself !!! Discipine wise, we say "NO" to her in a stern voice whenever she does something she's not supposed to do. This almost certainly will start a crying-on-the-floor session which we'll just ignore cos once she is in that mood, she's just too angry to listen. And yes, she gets the occasional smacks on her hand too.

oopsie..i think she's entering the terrible two phase now :) Ashley was like that too once she hit toddlerhood *shake head*

I can imagine how hard she cried. I don't know, my 2 year old experience some insecurity (I am a full time working mum), a friend of mine suggest me to spend more time to play or cuddles him. And it works! in just 2-3 wk time he is a happy and outgoing little 2 year old :-)

No worries..its just a phase and it will go soon. Google on Wonder Weeks or commonly known as WW...

Maybe by giving her a little baby bro or sis, she will mellow down, haha! Alycia was once a very difficult baby but surprisingly, she changed 360 degrees into a very caring and loving che che when Baby C was born.