So far, Elyssa has attended about 6 or her Gymboree classes. I'm pretty happy with the progress so far. At least she no longer sticks to me like what she did in her trial class back in May.

But of course she doesn't normally follow instructions from the teacher, but neither do most of the kids anyway. Ha hahhh...... not easy for a teacher when the "students" are kids 10-16 months old who either don't have a clue what you're saying or choose to completely ignore your words !! When it's time for the kids to go through a play equipment routine (eg. climb up the mini ladder, then walk the plank, then throw ball, then slide down) it's very common to have "human traffic jam" with one kid standing right in the middle and refusing to budge an inch.

My main intention for the classes is for Elyssa to be comfortable with kids her own age. So if she refuses to do certain things (she hates the parachute session) , I just let her be. I also want her to enjoy the classes, and not see it as a session where she's forced to do things.

One of my observation is that she's not a "groupie" sort of person and that she likes to do her own things. Like during the "busy box" routine where the teacher brings out a box full of toys. Some kids will immediately go towards the box, take out the toys and play at the centre. Elyssa tends to stay at the side, eventually pick up a toy then walk around the area rather than sit in the centre. Hmm.... wonder what that means? Good sign of independence? Or bad sign of her having difficulty paying attention in class next time? Well, I guess I should resist the inclination to analyse too much at this stage !


Sitting in the rocking boat - 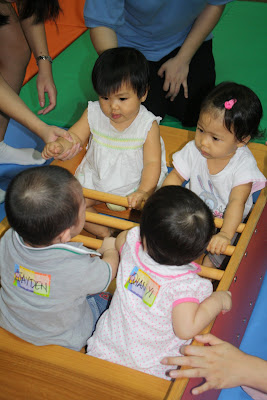 First slap from a boy? - 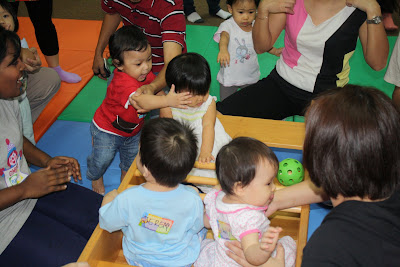 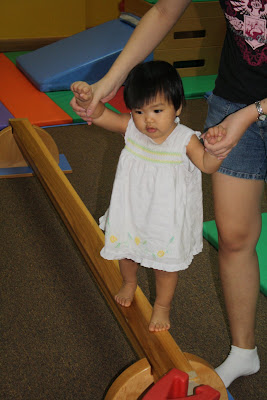 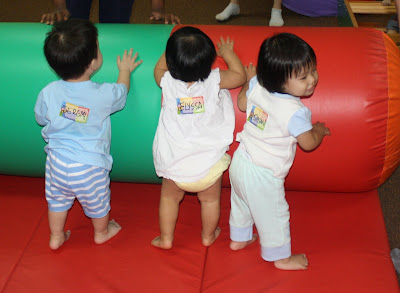 can u believe it since your first blog abt gymboree i have not brgt william there yet, jst have too much to do i guess, but last week as you read i brgt him for his first play school session... he loved the toy playing session, totally no problem but when it was circle time to sit and do what the teacher was showing, he refused lar, kept wanting to walk ard... haiyoo!!! i looked ard and saw even bb his age can sit and behave... maybe he's the newbie, and hopefully after time he will also sit and behave! haha... when is your gymboree lesson so i can maybe bring william a long

ai yo.. keira hates gymboree. i don't know why. she cries and refuses to participate even after 1 month. i try not to force her to participate and just hope she eventually will enjoy it.

Don't worry, not wanting to join the group does not mean anything bad. She's only 15 months. Kids' behavior will change from time to time. Alycia is a totally different person (character-wise) from what she was when she was 15 months, 25 months, 35 months, 45 months, etc. From an absolute anti-social, she's now super sociable.

I've thought of letting Jayden try ut Gymboree or Tumbletots too, but when I saw the fees... hubby and I just shook our heads hehehe...

Yup our main purpose was also to let Jayden just mingle with other kids his age.

Give Elyssa some time, she'll be fine :)

i think u hv done the first step..and its good already. let elyssa adjust...she will settle down one..:)

aw, she is one lucky girl and a smart one too. Looks so cute doing all those. it sure does look fun but I wont splurge on those for ethan lor. That's why i said, elyssa's lucky. LOL!

I think she is doing great. Keep doing what she is doing right now...and with the exposure, I'm sure she will blend in one day.

Irene - oh yes, do come along for the next gymboree session. I have a free pass that you can use. I'll send you more details on FB.

Shireen - thx! good to know that behaviour will still change. hmm... hope Elyssa doesn't keep the bad ones and let go of the good ones!!

Kristie / Merryn - yeah, the classes are blo*dy expensive. I'll prob seriously reconsider sending her if I can't claim the expenses. Hey, I have a few free passes so let me know if you want to use them ya? It's valid for first timers only.