March seems like a holiday month for us, with holidays planned out for 3 weekends in a row. Various reasons actually - Camerons was holiday with my family, Batu Gajah was holiday with hubby's family and finally Penang was to attend a friend's wedding plus a holiday just for us.
The wedding was on Saturday nite, but we decided on a 4D, 3N trip to Penang. Had lots of things planned out, food wise! On my list of "Things to Eat" were Assam Laksa, Char Kway Teow, Chee Cheong Fun, Rojak, Chendol etc etc..... also White Coffee and Kai Si Hor Fun from Ipoh. Hahha... was almost like an eating trip.
We left KL quite late on Thursday morning. After the disastrous road trip with Elyssa fretting most of the journey to Batu Gajah, I was more prepared this time. I brought along a whole bag of plastic toys that she hasn't played for in a while, cut out some carrot sticks, made 2 toasts cut out into 4 triangles, her favourite water bottle and told hubby to be prepared to stop often.
And the result? She sat in her car seat all the way to Penang and with hardly any fuss. I was sooo proud of her!!!
By the time we checked into the hotel, it was almost 6pm. We headed straight to the swimming pool. We bought her a bright orange Nemo float in Ipoh and we were pretty excited to let her use it.
But nope, she wasn't keen on it...... 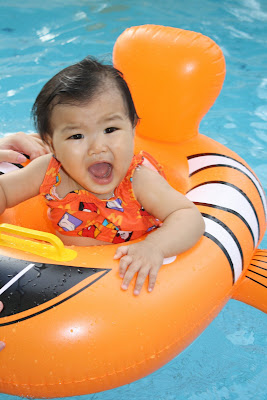 " I wanna get OUTTT !!!!"
Instead, she enjoyed it when I lifted her up and down from the water... 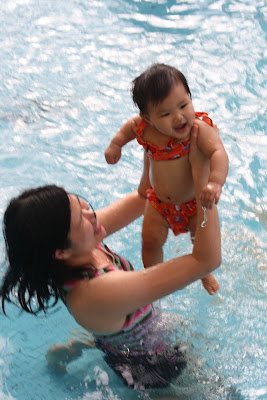 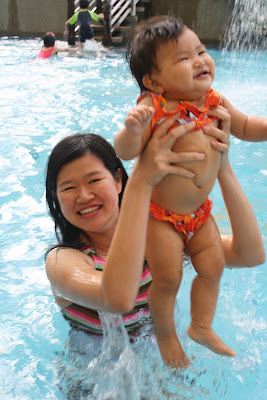 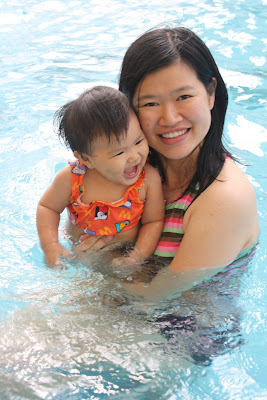 But no lar.., my arms got tired after that. We didn't stay in the pool too long cos the water was quite cold. So we continued Session 2 in the bathtub. She actually preferred the warm water in the bathtub. 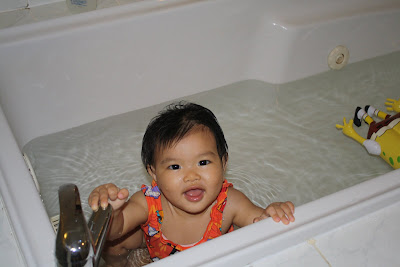 " Mummy, next time take me to a HEATED swimming pool, okay?"

After that, we went out for dinner with some friends, had a slow walk along the esplanade back to the hotel (Elyssa fell asleep in her stroller) and then Zzzzz.... end of Day 1.

hahaha....elyssa looks so cute in the sexy orange bikini :D

so chubby your Elyssa!! cute cute...

it has been more than 10 years since I went to Cameron. Miss that place so much!

elyssa so cute in her bikini!! Should frame the bikini next time with her photo!! :-)

I miss penang so much!! Will be 'back' there next week during my birthday!! Hopefully my hubby didnt change his mind cos he just recovered...

bkt tinggi is just below genting in fact can see genting also. Its cooler than KL but i advise u not to go now, wait until they revamp the place entirely then only go. Its quite worn out and its pricey for that kinda old place.

We went to Penang during the sch hols too. Love the food there..and it was more of an eating trip for us too :)

Look at Elyssa...she's having such a good time in the pool with mummy.

wah you were in pg for the hols...
ohhh you must had a great time savouring those delicious food hehehe...

love the photos of you and elyssa at the pool...

Merryn - wait till u see the daddy. Cos tat's the true copy...

Little Prince's mummy - Oooo... hope u get to go. Enjoy your trip!

Sasha - thanks for the BT tip! Will wait for a while first, or mebbe just a day trip.

Ivy/ June - Penang is such a food heaven !! My weight really increased after all the food binging.

wow i am so envious.. i would also love to go on an eating spree hahahha... mummy and elyssa look so happy in the pool!

i can't wait to take keira swimming too. she has never been in the pool b4!

and well done for keeping elyssa entertained all the way to penang! must have been so tiring for you.

Wow... 3 holidays in a row, n within the same mth. Syiok!
Did she fuss when u're out of the hotel? Go food hunting, she doesn't get to eat. Better in the hotel, got water play. :D