Went for a short 3D/2N holiday in Cameron Highlands with my family over the long weekend. 9 adults (including my bro's maid) and 2 kids. For days and days before the trip, there were looong discussions on who should sit in which car. My brother and SIL could only make it for the 2nd day so we only had 2 cars going up on the first day. In the old days, I would never have imagined problems with getting 9 ppl into 2 cars. But then now there's the issue of 2 bulky car seats, "bucket" style seats that can only comfortably seat 2 at the back of the car, some ppl who can get car sick etc etc... So options such as maid go later, Justin + maid go later, father go later, squeeze 3 at the back in car A, squeeze 3 at the back in car B, use smaller car seat bla bla bla were discussed.
.
The night before we were due to leave, we finally agreed on the final seating arrangements. (tho even the "final" arrangement kept on changing till the last minute) In the morning, my bro said that Justin coughed quite a bit the previous night so he and the maid will go the following day. Okayyyyy..... so much for all the long discussions. In the end, all 7 of us comfortably went up in 2 cars. Reason I'm writing all this long-long story is that this was just the beginning of many, many discussions that we had in Cameron Highlands. Ha hah...... I never really noticed before but hubby said that the thing about the "Ong" family is that we are just too democratic. Everyone blabs and blabs when it comes to suggestions but when it comes to making decisions, it just takes forever!!
Day 1
We left KL quite late (close to 11am) due to a tyre puncture in my BIL's car. Had a yummy lunch at my favourite restaurant in Tapah then went up the slopes of Cameron Highlands. I got a little car sick trying to entertain Elyssa on the back seat. We made a quick stop at the Lata Iskandar waterfall and after that my mum took over the task of entertaining Elyssa at the back while I sat in front.
Reached the 4 bedroom apartment at Villa Dahlia around 2pm. We all had a nice afternoon nap then afternoon tea. Well, everyone EXCEPT for Elyssa who was just so excited that she refused to sleep. Took some photos of her. I think she looks cute in her pink jacket! 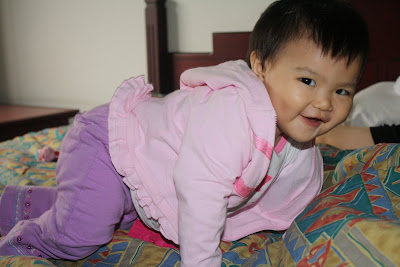 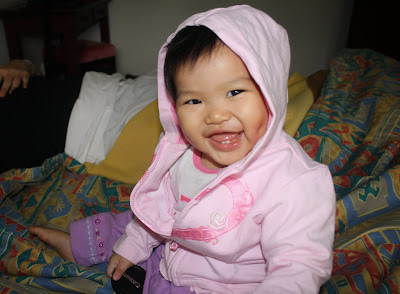 In the evening, we went to the pasar malam in Brinchang. I've always loved walking in that pasar malam. Unfortunately, it started to rain shortly after we got there. We still continued our shopping holding our umbrellas tho! By that time, Elyssa was exhausted and fell fast asleep on her daddy's shoulder. We bought dinner from the stalls then went back to the apartment to eat.

Day 2
Had a leisurely breakfast in the apartment. 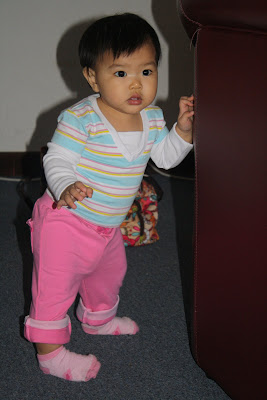 "All ready to go kai-kai" 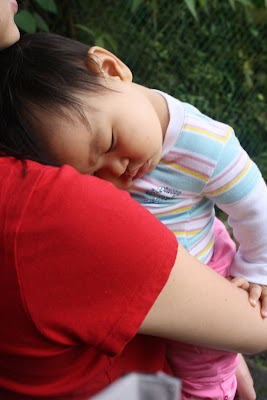 Had lunch in Tanah Rata and met up with my bro, SIL, Justin + maid. 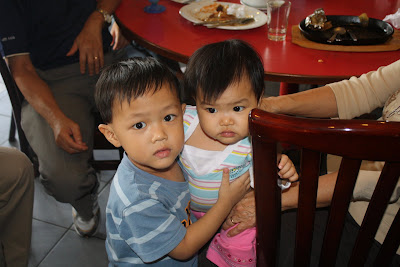 Justin & Elyssa
During lunch, we had our famous looong discussions on what to do after that. Rest? Bee Farm? Strawberry Farm? Tea Plantation? Drink Tea? bla bla bla.....
In the end, we decided to split up - my father followed my sis back to the apartment to rest, my mum followed my bro to the strawberry & bee farm and hubby, Elyssa and I went to have tea.

We went to Bala's Tea House to have some scones and tea. Stayed there before when I was 6 months pregnant and we had nice memories of that place. However, this time the experience was just awful. The staff were so rude and treated us like "second-class" customers. Aaargh.... not going back there again.

Not satisfied with our afternoon tea, we went to YTL's Cameron Highlands Resort. It was just so much better. The ambiance, the friendly staff etc. Not cheap - the high tea set was RM55++ per person but well worth it. 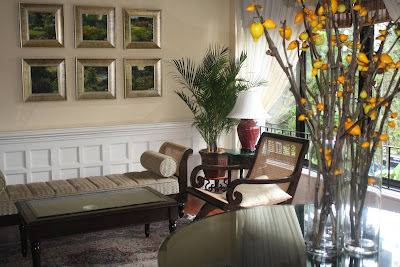 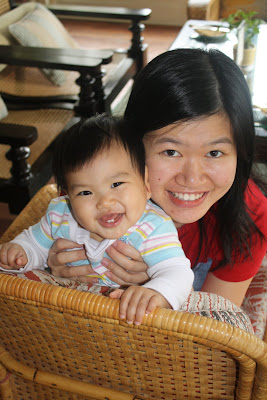 At night, we had a nice steamboat dinner (celebrated my sis's birthday as well) followed by wine and birthday cake in the apartment.

Overall, it was a nice holiday. Although we have our weekly "family makan", it has been 2 years since we went on a holiday together. Always nice to spend more time with family members :)

oooo Elyssa's dimple is very deep. surely she will be very beautiful when grow up...

oh what a fun trip with the family :) elyssa must be thrilled :)

ohh, that's a nice photo of Elyssa and mummy :)

wah so syok get to go holidays...lil elyssa is really sweet & adorable, she is always smiling :-)

Oh..what a great trip you had with yr family. Love the photo of Mummy and Elyssa. :)

what a nice trip!! Elyssa's must be very excited!! How's the weather there, plan to go next month...

was giggling when i read your blog.. actually i didn't realise there were so many looong discussion also...and on the 3rd day before departure, we really did take a long, long time before there was a conclusion. and elyssa looks more and more like johnny... :-)

Elyssa has grown so much, she looks so matured now with her 2 little teeth :)

Rachel - I love the dimples too. Wish I have dimples myself!

Barbara - I think (hope) she did enjoy herself.

Ivy - thanks. one of the few photos that I post with myself in it :)

Little Prince's mum - It rained and rained quite often. Gets pretty cold when it rains. Do bring umbrellas and extra jackets.

Cat - your first comment on my blog.. thx! Yes, we did spend so much time discussing. And the ironic thing was that everytime we had our discussions, the weather was actually quite nice. And when we finally decided, it rained shortly after. What a waste eh?