For the Deepavali weekend, hubby, Elyssa and I stayed a night at Clearwater Sanctuary Resort in Batu Gajah. It was our first time there, and I just luuurve the place. Very relaxing and peaceful place indeed. I was a bit worried when I saw the slightly run-down reception, but the chalets were nicely maintained. Spacious, clean, airy and the best part was the amazing view. 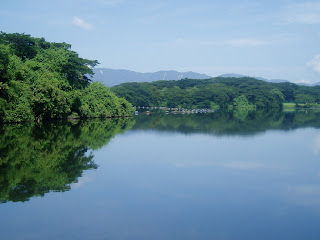 View from the balcony 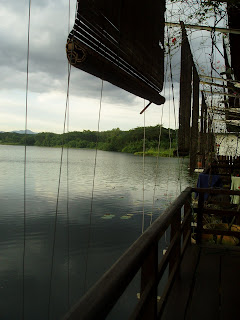 In the "pre-baby" days, hubby and I would have happily participated in those activities, but this time we didn't even do a single one but instead spent quite some time in the well equiped childrens room!!

Some photos of Elyssa taken there- 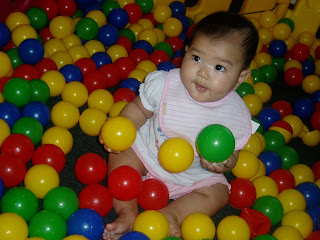 "Shall I pick a yellow ball or green ball??" 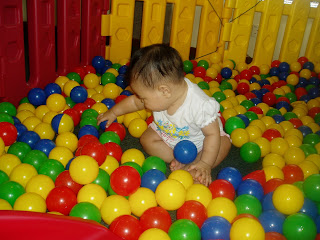 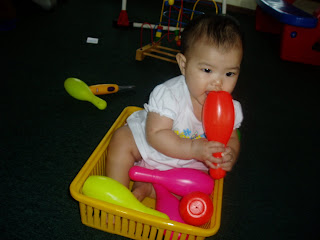 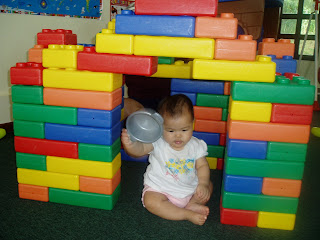 "My daddy built this house just for me"

While Elyssa was playing with the balls, I saw hubby building a house with the giant colourful building blocks. He kept saying that it was for Elyssa but I could see that he was really enjoying himself. Ha hahh..I think the big kid was the one "playing" with the building blocks. Elyssa only sat in the house for 2 minutes for us to take some photos.

We originally wanted to drive out to Batu Gajah but ended up having both afternoon tea and dinner at the resort. We had slow leisurely walks around the resort with Elyssa on her stroller. Also went for a nice body massage at the spa after dinner. Aaah.... bliss.

The following day, we went to Ipoh after checking out from the resort. Same old routine everytime we go there - food at Kong Heng, coffee at Nam Heong, drive-by my old house (my parents stayed there for >30 years before moving to KL about 2 yrs back), visit hubby's grandma etc etc.

We headed back to KL around 6pm. It was just a short holiday, but a nice one. :)

Indeed a relaxing holiday. :) Elyssa is so cute and Daddy made her a big house...haha..

Its a beautiful place. Used to go and stayed there and played golf with my wife before ryan arrives. Once stayed in the room that apparently Chow Yun Fatt stayed shen he was filming The King And I. We are from Ipoh too.

I love the view!

I miss Kong Heng's food. I am fr Ipoh too.

Ooo... nice place to get away!! How I wish we could do that!

i was there once when i was studying in ipoh...
it brought me down to memory lane!

Mummy Gwen - Her daddy had a good time!

Daddy - I was hoping to visit the King & I movie set but it's now closed. Good to know you're from Ipoh too :)

Irene - I wish I can wake up that view every morning

HFM - Goodie.... another "Ipoh-mali". But Kong Heng food quite dissapointing this time. I find their food quality very inconsistent.

oh, i haven't been to this place before. hmm...maybe we should go there for a short break. how's the food? ok? any coffeeshops/stalls near the resort?

Taste wise, the food at the resort so-so only. In terms of pricing, not super high like hotels but slightly above normal outside food. Overall it's convenient if you don't feel like going out.

I think the nearest coffee shop/stalls will be Batu Gajah town itself.