Wanted to go for our first holiday as a daddy-mummy-baby family unit before I start work. Hubby took leave on Friday, so we planned for a nice 3D,2N holiday in Cherating. Started calling for hotels only on Thursday night, and was quite surprised that most hotels were either fully booked or were too expensive. (we had a RM250 ceiling). After some time, we managed to book a room at De Rhu Hotel located half an hour from Cherating for 2 nights at RM190.

So, off we went on Friday morning! Took longer than expected to get ready, with all the baby stuff to pack - bath tub, sterilizer, baby clothes, hankies etc etc. Left the house around 10am and the journey took about 4 hours. Luckily baby Elyssa slept in the car seat most of the time, and was only cranky at the end.

Hotel was pretty dissapointing. Quite run-down and there was a musty smell in the room. But was tired after the journey, so went straight to zzzz followed by a quick dip in the pool. For dinner, we took a drive down to Cherating. Had a nice n cheap makan at a Malay shop. Ikan bakar with special sauce, Sotong Goreng, Tom Yum soup and Kang Kong Belacan. Yummy, yummy !!!

Quite late by the time we got back to the hotel. Watched a bit of tv and then tried to get Elyssa to sleep. Took soooo long. She kept fussing and fussing. 2 things came to my mind - either she was not feeling well or that the room was haunted !! Had to resort to carrying her round the room and when that didn't work, we carried her and walk round and round the lobby. Was so relieved when she finally fell asleep. Hubby said he hardly slept the whole night cos of the musty smell. As for me, I was in dreamland after I saw that Elyssa was asleep.

Next day breakfast so-so only. Decided to check out other hotels in the area. Again, not an easy task. Almost gave up and wanted to head back home. But then decided not to spoil our first holiday and ended up checking into Hyatt Hotel, Kuantan. Only deluxe rooms left, and it was RM350, with no breakfast, and that's already corporate rate. Really nice hotel though. After we checked it, we felt like the holiday really started and we got that happy-holiday mood!! Room was very spacious and comfy, with a nice bathroom. and of course with no musty smell..... It was nice to just soak in the bathtub and relax in the room. That night (after a rather forgettable dinner at a Japanese restaurant), Elyssa fell asleep right after her milkie-milk session. It's now our standard joke that our little princess can only accept no less than Hyatt standard.... oh dear, oh dear ! 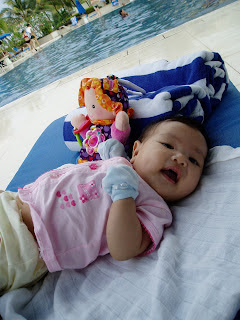 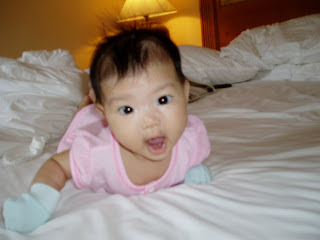 
Anyway, all-in-all despite the little problems along the way, it was a nice holiday, and hopefully Elyssa enjoyed it as much as mummy and daddy :)
Posted by Adrine at 2:51 PM