- belated post on Father's Day. but at least it's still the month of June! -

Since we had a cake for Mother's Day, it was only fair that we got a cake for Father's Day as well. We celebrated really early this year though, since hubby insisted that Father's Day was the first weekend of June !! he he.

He did the cake ordering himself (actually it was a cake voucher that we needed to redeem). When asked by the hotel what to write on the cake, he was too shy to say it was his own Father's Day cake, so he told them to just write "Elyssa" on the cake.

So, just like for Mother's Day, the cake became "Elyssa's cake" :)

The Happy Girl
She kept saying it was her birthday cake 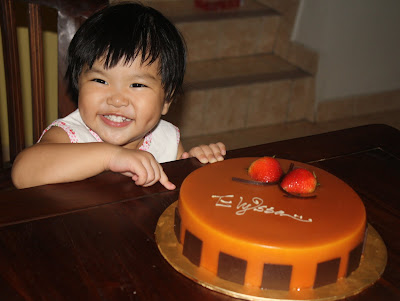 Photo with Daddy
(someone was interested in nothing else but the cake!) 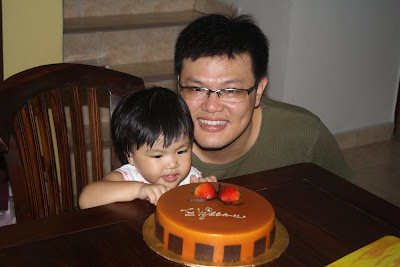 Kiss Kiss
(gosh, she looks really round in this pic!) 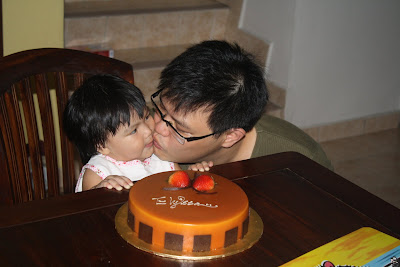 so sweet :) hey, the cake looks familiar. Is that from Renaissance? My dad has the vouchers and we celebrated his birthday last week at the Dynasty Restaurant and we redeemed the cheesecake too. Very yummy!!!

Everything is becoming Elyssa's thing!

Barb - yes, it's from Renaissance! I wasn't expecting much but I think it was one of the best cakes I've ever eaten.

lovely cake for a lovely family ;)

Adrine, dont mind, pls drop me an email: k305@yahoo.com on your progress when u are free, cheers!

Oh dear, it must be an expensive cake... happy belated father's day to our hubby! Can see the girl really enjoyed the moment!^-^

Have a nice day!

Adrine - Yes that's the best cake ever! My dad doesn't like cheesecake but he ate almost half of it :P And....this cake only cost rm50+ (i saw the price at the deli) :D BTW, I really like the Prestige Plus vouchers. They have the best deals :D Do you have the Pangkor Island Resort vouchers?

Elyssa is so cute. She was really glued to the cake. That's a nice and delicious looking cake.

The smile on her face is priceless.

Alice - actually, the cake was free after the voucher redemption. :)

Barb - yes, it's the Prestige Plus vouchers. We have been really utilizing them quite well! Went for the Pangkor hotel late last year. Also used the vouchers for Melaka and Putrajaya already, plus the meals. :)

The cheesecake look so rich and good. But too bad, I do not like cheesecake.