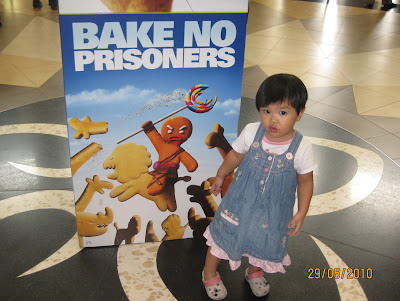 We brought Elyssa for her first cinema experience last weekend. A few hours before the show, I started prepping her for the event.

I also warned her : Cee-Nee-Maa dark dark. Elyssa cannot make noise, cannot cry. If you're tired, just close your eyes and oi-oi on mummy's lap. You still want to go? I got an excited "yes" each time.

After all the "prepping", I was pretty confident when we entered the cinema to watch Shrek Forever After. I also brought her water bottle and biscuits as a back-up. My main concern was that she would talk and laugh too loudly (she's a noisy viewer at home), so the biscuits were meant to keep her mouth busy :)

So we went in and found our seats just before the show started. She told me quietly - "Cannot talk. Shhhhh". Ok, good. Then lights off and screening previews started. First preview was some M. Night Shyamalan movie. Not good, I thought as it's a scary movie with plenty of dark eerie scenes. Poor girl started crying. Gave her biscuits..... quiet for a while. Cried again, gave another biscuit.... quiet again. Then suddenly: "Waahhhhhhhhhhhh. I don't want. I don't want". *loud wailing started*

Hubby immediately carried her (he hehh.... agreed upfront since he wasn't keen to watch Shrek in the first place!) and said he'll be back when Elyssa calms down or falls asleep.

When we met up after the show ended, I asked hubby why he didn't try to return to the cinema. I was surprised when he said he did a few times, but each time Elyssa started crying and told him "scared, scared".

*Sigh*, So THAT was basically her first cinema experience - Less than 10 minutes in the cinema hall. She didn't even make it past the preview screening! And hubby wasted his RM11 ticket. All my "prepping" failed :(

Ah well, I guess it was worth a shot. Won't know if we don't try! Mebbe next time I'll time it so that we enter the cinema after the show starts so we don't risk having to sit through a scary movie preview.

Oh yeah, what did she say when we walked out of the cinema lobby? "Mummy, I want to go Cee-Nee-maa Again".
Posted by Adrine at 10:13 PM

Never mind..bring her nextime wen she is ready for it.

haha! never mind... tell her u had an awesome experience watching shrek... get her the dvd and watch it at home... tell her next time u can bring her to watch cartoon on the big screen again! :)

Now you got me scared... I just planned to bring my girl Juan this month for her favourite Toy Story 3!:(

Please have a nice day!

I too am planning to bring Ryan to watch his first movie at the cinema. Shrek too. I guess at Elyssa's age... anything can happen. U said it right... never try...dunno how she will react.
But I am disappointed with the cinema ppl for showing such a scary show during the preview. Especially it is a kids movie!

hehehehe...at least mommy got to watch it all by herself :D do you know that Ashley has yet to watch a movie in the cinema? i hope she won't bawl when her time comes cos she dislikes dark room :D

Ahh, at least you tried. We don't borther to try with William and jst let him watch us watch movie at home... haha... his backside very itchy one... sure will walk around if go to cinema. Vic also cannot sit still.

adoi. wait till she is a bit older ;) im sure she will lurve it. big big TV, popcorn!

Elyssa is such a big girl now!

Hahaha...try again next time when she is ready.

Salute Adrine, at least you have the "courage" to bring your little girl to cinema.

I have never stepped into cinema since Sarah was born. I know for sure Sarah will not like cinema.