It's the first day of Chinese New Year today. I was really looking forward to this CNY since it's Elyssa's first. However, it's a quiet one this year. I'm home alone with Elyssa at my parents place. Hubby is home alone at our house. Why? Cos hubby contracted German Measles!!! *sigh*, of all times....... :(
Our yearly routine is to go back to Ipoh for CNY, but for this year, there was a last minute plan to have a family gathering in Singapore instead. Made a mad dash to make Elyssa's passport the week before I went to Beijing. Would have been a nice gathering in Singapore, we had plans to visit Sentosa Island, Vivo City, visit friends etc etc..
But at least Elyssa and I had a CNY eve steamboat dinner with my parents and other relatives last night. Poor hubby had to stay alone at home since he's still contagious. He did come over so that I could pass him some food and also because he wanted to see Elyssa. He did see her, but he had to stand outside the house so as not to infect her. Poor guy... and it was actually his birthday yesterday!
.
Well, CNY is for 15 days so I guess we'll somehow make up for it. No point being upset over something that we can't change. To end this CNY post on a nice note, here's a photo of Elyssa in her little "cheongsam dress". I just love the dress and the photo! 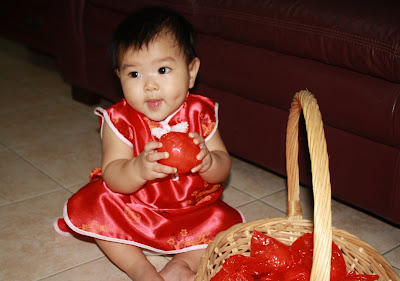 What a cutie, with a cute dimple!

hey, gong xi gong xi. you are from ipoh too?

elyssa is so so cute in her mini cheong sam! lovely!!!

she looks lovely in her cheongsam :) pretty girl!

Hi... sowee to hear abt your Hubby's measles... hope he's better. Was at Sg and Vivo city the last day. However, did not plan Sentosa Island, couldn't be too ambitious with soooo much visiting to do. Anyway, catch up with u soon... hopefully REAL soon!