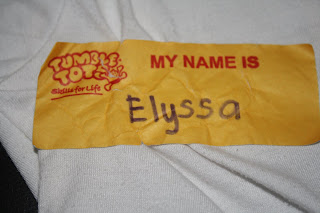 I took Elyssa for her very first session at Tumble Tots last weekend. I was very excited when I found out a few weeks back that there were classes for babies from 6 months onwards, called Gymbabes. When I told my parents about Gymbabes their reaction was something along the lines of..... "what?? a class for Elyssa? she's too young to know anything! No point! etc etc.... ha hahh.... I wasn't surprised at the reaction. But since the class fee was within the limit of what I can claim from my company, I thought that there was no harm trying. And I thought that it'll be good for her to interact with other kids.

So anyway, we finally made it to the class last weekend. It was a very small class - besides Elyssa there were only a pair of boy-girl twins and another boy. All 3 were > 12 months old. The instructor said the class was normally bigger but was small that day probably due to the school holidays. The class started out with a "together time" at the playmat in the middle of the room. It was a short singing session with some baby massage time. After that, it was time for the babies to have a go at the climbing/walking on narrow bar/tunnel crawling, rolling etc stations around the room. Since Elyssa can't even walk yet, the things that she could do was quite limited. About half and hour later, it was back for another short " together time" at the playmat. And that was the end of the 45 minute class.

And the verdict? Well, I've gotta agree with my parents. She was happy in that class, but that was because I was playing with her. There actually wasn't much time for interaction between other babies and parents. Most of the time she was just playing with the toys on the floor, and I already have a huge stash of toys at home anyway.

So I decided to just pay RM25 for the trial class without signing up for the normal classes. Even though the cost for me is minimal (not free cos my claims are a taxable benefit) I'm not keen on the hassle of having to be there at a fixed time and day every weekend. I'll probably give it another go once she starts walking.
Posted by Adrine at 11:16 PM

Ur co so good one... can claim for such expenses. Yeah... if she's not really utilising the equipments there, might as well try again later when she's more mobile.

hmm..i've never sent ashley to any of these classes before. actually she has not even been to kidsports. i'm afraid of the germs from those playthings...hehehehe

at least u got to try it and know that elyssa might learn more from the class when she's older!

yeah lor...yr co has benefits even for kids education!! that very very good.

If u intent to send her for classes, I would suggest Baby Sign Play Group or those music classes like Kindermusik or such.

Yeah..wait till Elyssa is older and try again.

Sharlene attended Tumble Tots classes when she was 17 mths old and since she's going to attend pre-school, I stopped her lesson end of last year. Maybe, you can let Elyssa try again when she's slightly older.

wait till she is older n u can try Vital Years, it's an Early Literacy Centre.. kids as young as 18 mths old go there to learn to read n the best thing is.. the class is much fun. How do i know all this? bcoz i've work there b4 n stopped only to care for my boy ethan. i've used the methods at home n my boy can read simple words from 12 mths up.. he is into 3 syllable words now such as aeroplane and elephant. http://submerryn.blogspot.com/2008/11/21-first-formal-lesson.html

Emmm...We thought of registering Ryan for Gymbabes too. Went to the outlet at Subang Parade a couple of days ago but no one seemed to want to entertain us with our enquiry. So we walked off and thinking about going to the one at Curve. Now that we know what the class is all about, I will probably talked to my wife and register Ryan when he is older. No point paying for things that he can already do at home, especially in times like this.

I am also thinking of enroling Jonathan in a playgroup. Don't know which one is better. Probably can sign up for the trial session like what you did.