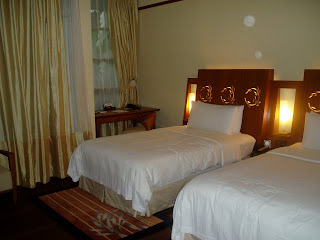 My hotel room
Last night, I stayed over at Shangri-La hotel in Putrajaya for my company's "Away Day". Big milestone cos I've never been away from Elyssa for an overnight stay before. I was worried how Elyssa would cope and of course how hubby (& MIL who's helping out this week) would cope. I even decided to drive there instead of hopping on the shuttle bus provided, just in case I had to rush home during the night.
There were activities after dinner and by the time I checked my phone, it was close to 10pm. My heart raced when I saw a few missed calls from hubby.
I immediately called back and the conversation went something like this:
Me : You called? How is Elyssa?
Hubby : She's sleeping now
Me : Was she ok earlier?
Hubby : She cried & fussed a little, but overall ok. She's fast asleep now.
Me : Oh.
How come you called me so many times?
Hubby : I was returning your earlier call
Me : Oh.
Well, a part of me was relieved that she did alright on my first night away. And another part of me........... felt like CRYING.
My little baby can do without me at night already! This little baby who practically spent the first three months of her life sleeping under my armpit.. This little baby who always wants my attention at night... This little baby --- who's growing up so fast.
*Sigh*
Posted by Adrine at 10:58 PM

Something About Us said...

I used to think like you but console myself that there's always two sides of story.

maybe elyssa is very cranky but they do not want you to worry. so they tell you everything is fine. hehe..

think in this way and you will feel better :D

Well done mommy :D This is indeed a big milestone :D Good that Elyssa could go to sleep without her dear mommy. Ashley has been sleeping with me every night since the day she was born. So I don't know what would happen if I were to go away for a night. I'll have separation anxiety :D

it's good your hubby is able to tcare of lil elyssa...

I love Shangrila Putrajaya. Dont u think their room deco is nice with the glass partition???

Anyway glad that Daddy is capable to take care of Elyssa. Dont feel this way ok. Elyssa will always know who is the mummy.

Something About Us - in hubby's case, I think he would have have given a very detailed account if she was indeed cranky. But thx for the consolation :)

Mummy to Chumsy - You're right. The separation anxiety is probably more for the mummy rather than for the child!

AndrewJune - Yeah, I was glad about that, but then again, my MIL and niece was around that day, so the true "test" will be when hubby is really alone! ;)

LittleLamb - The rooms there are really nice. But too bad there were lots of activities so I couldn't spend much time in the room.

Yup, we always contradict ourselves, rite? On 1 hand, we don't want a koala bear, but when they can do w/out us, we feel a bit disappointed.