These days, I like to take a walk around the neighbourhood after dinner.  Trying hard to reach the recommended 10,000 steps a day. ( I normally don't reach the target, but I do make an effort to walk as much as possible)
Elyssa sometimes follows, sometimes doesn't. And of course, she likes to ask Why mummy wants to walk.  Sometimes I tell her "because mummy fat-fat already. so need to walk". 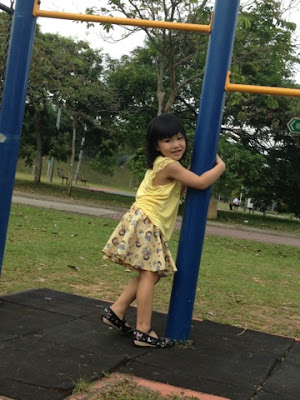 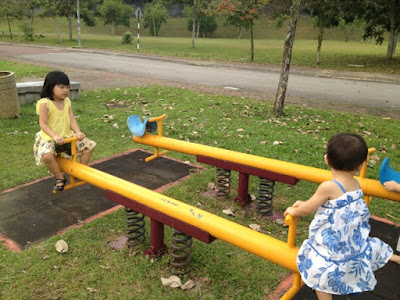 Then last weekend, hubby and I brought the kids for some playground time. While the kids were playing, I decided to take our dog for a walk. As I was approaching the playground from my first round, Elyssa shouted out really loudly with both hands by the side of her mouth:
"MUMMY, it's ok!!  You can go for another round.  Because YOU ARE SO FAT!!!   ok mummy? YOU ARE FAT, SO GO AND WALK ANOTHER ROUND".
Aiks!!!  Really didn't know where to look.  There were other people in the playground too.  *hide face*.  Oh, and when I shook my head (trying to tell her not to say anymore), she thought I didn't hear so she shouted her remarks AGAIN.   ;-)
Posted by Adrine at 1:01 PM

hahaha... elyssa so "mm pei min", at least justin will say, "no la, mummy not fat"...a diplomatic answer... but he did say before that i have big backside.

Must start teaching her Tact101... hehe.

Must start teaching her Tact101... hehe.

Hahaha! I'm sure the other people at the playground must have tried hard not to LOL :D

Hahaha!! We really have to be careful what we tell our kids now, they are sooo innocent, hehe! Btw, did you make that skirt Elyssa is wearing and the dress Erin is wearing? : )

Irene/Barbs - I bought a RM30 pedometer from Cosway! But actually, b4 I bought, I used to count the steps for the routes I normally take. Like one round around my area is about 600 steps. So if I go 3 rounds, I get 1,800 steps. And to one of my lunch places at work is about 1,000 steps. So at the end of the day, I try to mentally think of where I went and add it all up!