For my next sewing project, I wanted to tackle Pants.
Googled and found a simple tutorial :
http://www.simplymodernmom.com/2011/01/simple-pajama-pants-tutorial/
I wanted to make a pair of simple home shorts for myself. Ended up with this :
My first pair of Pants 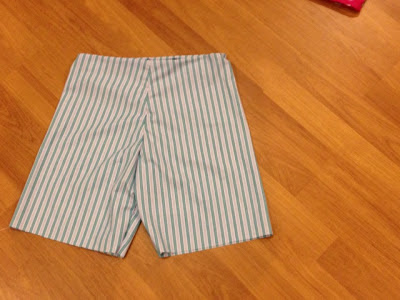 Flop because :   Wayyyyyy too small for me! I can pretty much put in ONE leg only through the waistband   ;-)
Why?  I used an old pair of shorts as a measurement sample.
Mistake #1 : After I measured, I "smartly" decided to use the width instead of the length of the cloth (save some cloth) since the width was short by "only" 1 inch.
Mistake #2 - my sample shorts was made of stretchy material. The cloth I chose for this project was NOT.
And I probably gave more seam allowance than necessary. So, I ended up with a pair of totally unusable pants. But still......I won't say it was a total flop. Ignoring the size problem, I was still pleased that I actually managed to sew a pair of pants!!  Yay, it actually looked like one!!
I was initially worried that I might sew the pant legs shut or get the crotch area totally wrong or something.
Of course after that, I just HAD to try again. Came up with this -
My second pair of pants 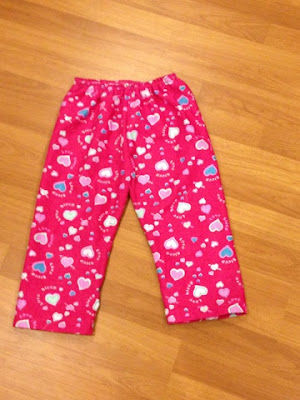 One leg shorter than the other. But what the heck.....I got the size right this time!!  Check out Elyssa in her new pyjamas pants. Yay!!﻿ 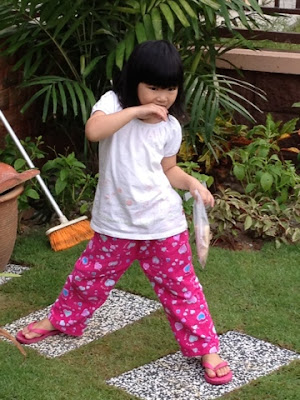 Oh, and I also made another pair of home shorts for myself. Turned out I still have measuring problems cos this one turned out too big! But big is better than small. Yes, this pair makes my butt look super huge, but it IS rather comfy to lounge around at home in.  ;-)
My third pair of pants 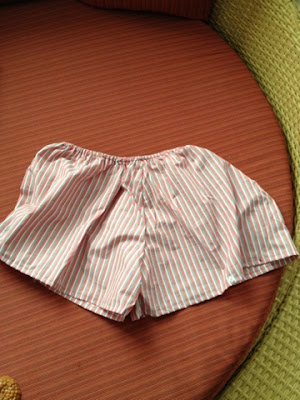 So, that's my pants story to-date. I want to make more, but for now, there's so many other projects to embark on.
Posted by Adrine at 12:47 AM

Good attempt...keep trying and one day you sure can success.

I think it's the material. This kind will make butt look big.

I have the same problem when making adult clothes. just can't get it to fit right!

Your little model is so pretty. You have lots of hidden talents huh. :)

wah..so nice. from now u will be able to sew many clothes for your girls :)