I was excited when I spotted this packet of colourful felt at Daiso, cos I had an idea of what I could do with it. 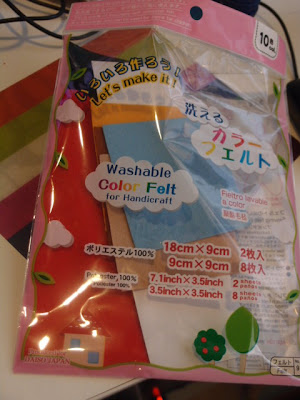 The second clip was done in less than 15 mins!  He he.  Cut corners by not doing the running stitches and the centre piece is just a circle instead of a flower shape. 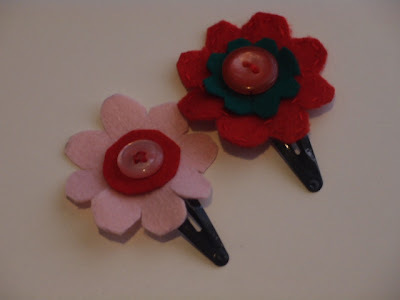 I made four hairclips altogether.  My sis saw the clips and asked whether the petals were supposed to look uneven.  Err.....I blame my blunt scissors!  ;-) 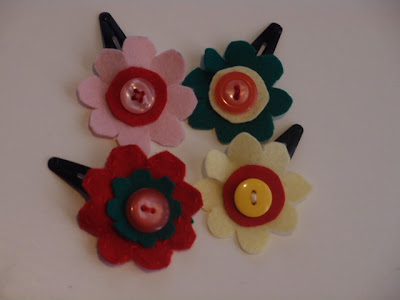 Pretty fun to make and very cheap too.
Clips - Bought during my Penang trip last time. (either RM 2.50 or RM3.00 for a pack of 10).
Glue - Didn't have any so I just sewed the felt flowers directly onto the clip.
Buttons - From my mum!  (she had a small container of mis-matched buttons)
Felt Material - RM5 a pack from Daiso.  Still got plenty more.

Forgot to take photo of my model wearing the clips  ;-)
﻿

They are so cute

Not bad for a first timer. Can't wait to see what other designs you will whip up with the remaining felt cloth and clips. And do remember to snap pix of your model wearing those pretty clips ya!

Nice. When Chenya has more hair, u make one and sent to me in china har? Hehe

Wah, woman... I didn't realise this creative streak in you... shows that accountants also can be creative, huh? Hehehe... : )

that is really cool. i want to try too!