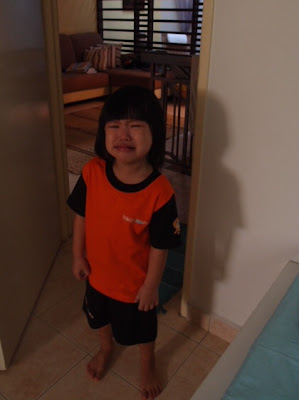 I was a little undecided whether to let Elyssa go to school on Tuesday morning. She coughed quite a bit on Monday night, but seemed ok in the morning. She was still very keen to go to school though. I told her that if she didn't cough from then till I got ready, she could go to school. She happily agreed.
.
Few seconds later, I heard a stifled cough.
Elyssa : "Nothing mummy" (she gave me a huge fake smile)
Ok, I let that go.
.
Few seconds later, another cough.
Me : That was a cough.
Elyssa : Oh mummy. That wasn't a cough. That was just a funny sound coming from my throat!
Me: ??????????
.
.
She coughed quite a bit after that so I decided, NO she shouldn't go school. Explained to her that she may make her friends sick, she may vomit in school, her friend's mummy will be angry with mummy bla bla bla but she started crying her eyes out. She kept saying " I want to go to school, I want to go to school" She also gave me all sorts of reasons -
.
.
I PROMISE I won't cough!
I PROMISE I won't vomit!
(huh? kept telling her it's not something she could control)
.
I promise to be a good girl!
Come mummy, pinky promise.
(huh? told her it's ok to be sick. Mummy and daddy also sometimes get sick)
.
I'm SORRY mummy!
(huh? kept telling her it was not her fault she was sick)
.
Whatever reasoning just failed. In the end, I just grabbed her school bag and asked her to get into the car as I really needed to go to work already. She quietened down but started wailing again when I went to my parents place instead of the kindy. She just refused to get down from the car.
.
Carried her down kicking and screaming. My mum asked me to just go ahead to go to work.
.
About an hour later, I called and my mum said "I managed to distract her. She's happily playing in the garden now". (Phew! Thank goodness for grandparents and their "magic touch"!)
.
Aiyo. What a dramatic day.
Well, at least I know that she LOVES going to school!
Posted by Adrine at 9:47 AM

I have a 'terbalik' situation here... my girl will have a beam smile if I tell her no need to go school!!

papa once said to me, "don't know what she does in school coz quite often she looks very tired after school" hahaha... well, she certainly have fun, one thing for sure.

yup, opposite situation for me too. Keira loves weekends and holidays and when she has a cough and can skip school!

It is a good news that she loves schooling so much...Get well soon!

Eh, last time when I kecik-kecik oso will cry leh if my Mom don't let me go to school! :D

So good girl and don't want to ponteng school!! My girl will tell me the different version if she coughs in the morning. She will apply sick leave from me if she sees herself not fit to go school, lol.

heheehe.....it's good that she loves going to school so much :)

Haha, she is so cute and you must be happy that she likes school! Most kids will be beaming with joy that they don't hv to go to school! I wonder whether Cassandra will like school or not. Plan to send her to pre school very soon as she's too bored at home now.

Crying to go to school is way better than crying to stay away from school. Glad to hear that Elyssa loves school so much :)

Elyssa really likes going kindy. Is a good thing also. At least mommy will have no prob in getting her ready to schol every morning.

Elyssa really likes going kindy. Is a good thing also. At least mommy will have no prob in getting her ready to schol every morning.