Baking Session with the Kids

Had an impromptu baking session with Justin and Elyssa a few weeks ago.
We made a small batch of cupcakes (using pre-mix) cos I wanted to try out the cute Hello Kitty and Winnie the Pooh silicone moulds I bought earlier that day.

I realised something during the baking session -- that it takes a lot of patience to let the kids have a "hands-on" experience cos they can be super slow!!! Had to tell myself a couple of times to just breath in-breath out and let them enjoy the process. Ha ha.

Elyssa mixing the batter with a whisk 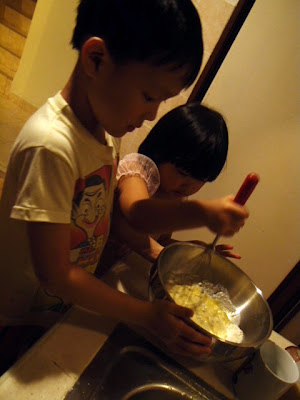 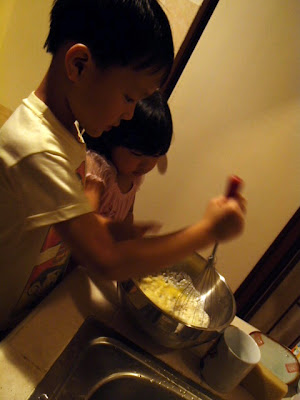 I let them whisk about 3 times each before taking over. That took quite a while cos for each time, one of them had to come down from the stool, let the other one climb up, care-fu-lly transfer the whisk to the other hand person's hand etc etc.

But it was kinda fun as well. When I took over the whisking, I told them I had to be entertained. So both balanced themselves on the small stool and sang 4-5 songs really loudly (while giggling away) while I whisked :)

Carefully spooning batter into the mould 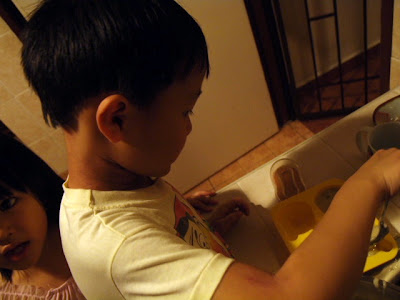 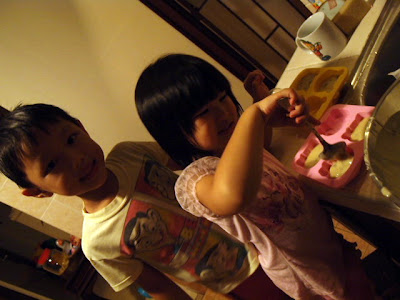 Justin's parents came shortly after we popped the cupcakes into the oven. Poor boy was so disappointed when he had to leave. I promised to pass some of the cupcakes to him the next day.

Ta Daaa!! Elyssa with the Blueberry Cupcakes
She went around proudly announcing that she baked the cupcakes together with Justin koko and mummy :) 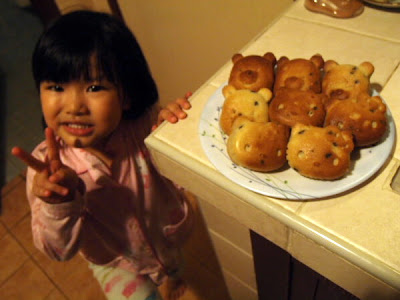 Gonna make another batch soon :)
Posted by Adrine at 1:58 PM

Oo nice or not the cupcakes? The moulds look quite good. But the colour uneven a bit.

oh yea...it takes alot of patience to let the kids do the baking themselves huh! But at the end of the day, they have fun!:)

btw, I do salute you for the patience as I never have. hence, I always prefer to do it myself when my boy is asleep cos is always faster and most importantly, my kitchen will be much cleaner, lesser work. :)

Haha... Imagine if u have to deal with more kids. That's me in Math Monkey. Anyway, Justin never got a chance to hold a whisk at home. I just use the mixer. He only get to decorate the cupcakes. The other day I ended up eating ur cupcake. Justin didn't like it. I feel that it's a bit too moist. Maybe because it's a premixed

Chi2 - Ya lor, colour so uneven. Blame it on the oven!

Little Kit Boy's mummy - Thx for dropping by. Actually, I probably won't let the kids help if I don't have a maid to clean up. (when I didn't have a maid last time, I got really worked up when Elyssa spilled flour everywhere when I let her "help")

Cat - I think the premix gives it a fake flavour. Dun think I will use again. Didn't want to bake from scratch this time in case the moulds not good (like ears part get stuck to the mould)

MeRy - it's made of sillicone. Very soft and bendable. First time using and I was quite pleased. Nothing got stuck to the mould at all.

Well done to the kids! :) I'm sure they will enjoy eating it more since they made them heh.. love Hello Kitty!