Sobs.... stomach flu bug going around in the family. Elyssa got it from her cousins and then my mum got it, then Erin and latest 2 victims are hubby and my maid.  Aaaargh! (I think I got a mild form of it too. Hopefully it was, so my "turn" is considered over)

Surprisingly, she didn't cry at all during the whole ordeal which lasted about 2 days.(especially for a girl who can typically cry over the smallest things!)  Instead, she just patiently hugged the pail saying "I'm waiting for the vomit to come out".  If she had to wait too long, she would just lie down on the floor next to her pail.  My poor baby! 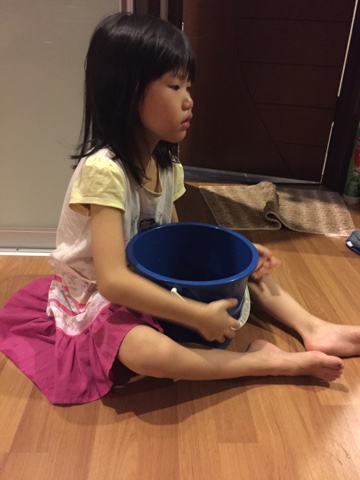 Glad she's ok now!  But she was already too thin before the stomach flu until can easily see the outline of her ribs. Even thinner now.  Time to fatten this little girl up!
Posted by Adrine at 2:46 PM


Hope everyone is fine now


Hope everyone is fine now

Aiyo lie down beside the pail some more.

Poor girl. Must be so uncomfortable at that time but so brave not to cry but wait for the vomit to come out. Glad to know that she is ok now. Hope the stomach flu go far far away!