I gotta admit that I was never a big fan of the "Gangnam Style" craze.

But I'm now a convert!  The last item on the agenda of the neighbourhood lantern festival event was a "Gangnam Style" dance. My mum was part of the group. (dunno why...but the thought of my mum practising the steps was enough to make me giggle. he he). On that night, the crowd was invited to join in.

I asked Elyssa whether she wanted to join and she said yes. I told her to look for Ah Mah amongst those standing at the centre area. She couldn't find Ah Mah but found herself a spot next to other kids. 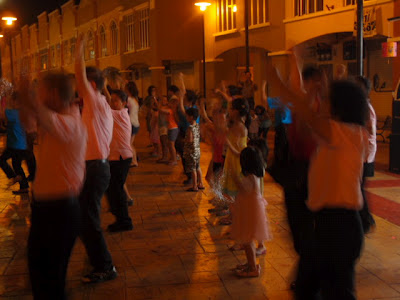 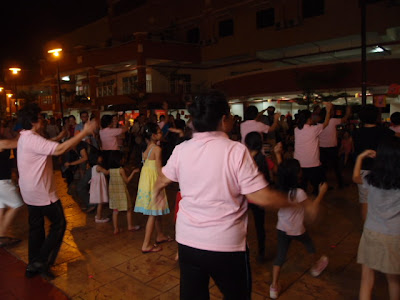 Elyssa during Round 3
Can see Ah Mah? (blue shirt next to Elyssa, showing her the steps) 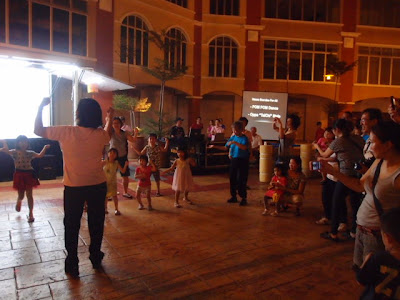 Pity my camera ran out of memory space that time. I wish I could have taken a video to capure the dance moves, the loud music, the cheers and the energy! Photos a bit blur cos they were moving so much.

It was such a thrill to see a big group of people from small kids to senior citizens dancing together like that.  Especially with my mum and my girl in that group.  Way to go Ma Ma, Way to go Elyssa!!!  :-)
Posted by Adrine at 11:41 PM

Aiks I had to leave early to make sure Annie got back in time for her day off. :( Imagine having to 'chau' the maid.

oh it must be loads of fun! what a lovely celebration it was.

And i have to go home to babysit the unwell king and anyway i was super exhausted to stay on... it must have been so cute