Elyssa had her first sports day recently!  Needless to say, I was excited as can be.

She alllllmost didn't make it though  - the night before the sports day, she was coughing quite a bit at night.  In the wee hours of the morning, hubby brought her to the loo to cough up any phlegm when suddenly he shouted "she's coughing up blood!".  Next thing I knew, he grabbed his wallet and wanted to bring Elyssa to the hospital A&E.

I checked her and saw some blood in her nose. Phew.....nosebleed only. (3rd time this has happened so far). Luckily not from her lungs which was hubby's panicky assumption!  ;)  Imagine if I was not at home that night, he WOULD have lugged her to the A&E at 3am!

The next morning, she was fine & dandy and eager to go for her sports day.


At the Stadium
Such a grand event for a kindy sports day!  Every 4 years, the sports day is on a bigger scale in conjunction with Olympics. 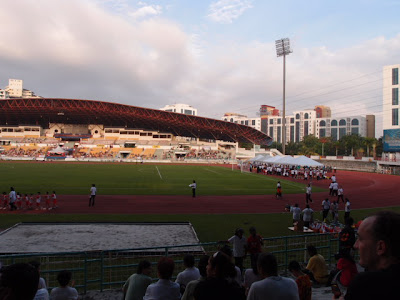 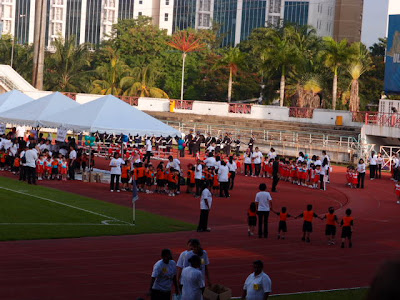 Elyssa and her classmates waiting for the event to start
When we arrived at the assigned gate, we had to hand over the kids to the teachers. Parents were not allowed on the field.
I was so excited when I spotted Elyssa from my place at the spectator stand.
Words just cannot describe the feeling of seeing my OWN little girl amongst the sea of faces on the field! Definitely one of those "Oh my god, my girl is growing up so fast" moment. Ok.....I admit, I had to hold back tears when I handed Elyssa over to her teacher.  ;) 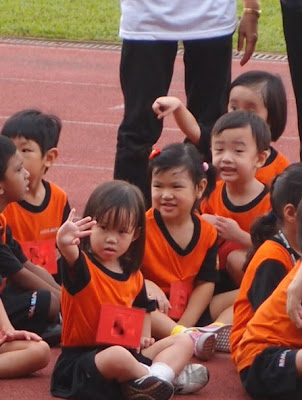 Long Wait
It took 1.5 hours between the designated arrival time to the arrival of the VIP!  I started to get a bit worried when I realised I didn't see /make her pee that morning. So I was relieved when I saw her school teacher bringing her to the loo. 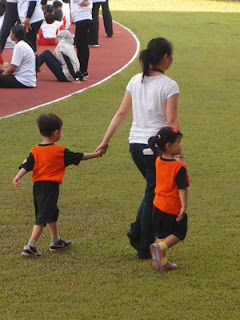 Finally, they can start!
After the VIP speech, the march past commenced. The kids have been practicing marching in school for weeks and weeks. 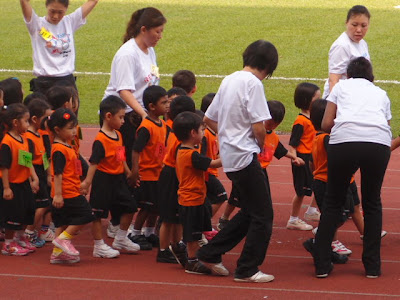 Accompanied by a band 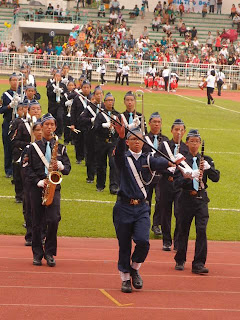 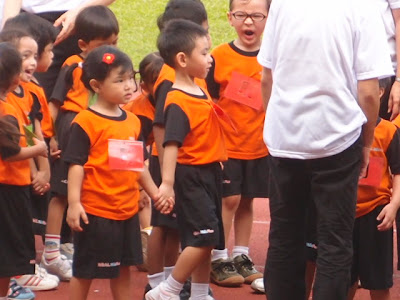 
Anyway, the games started after that.

Some of the Props 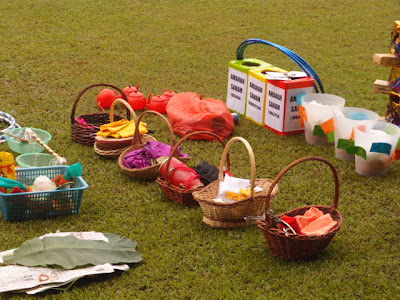 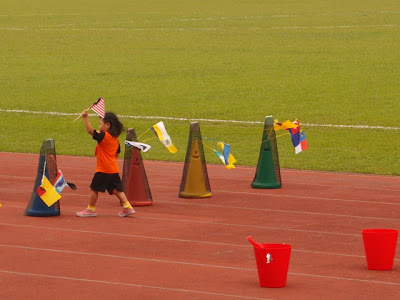 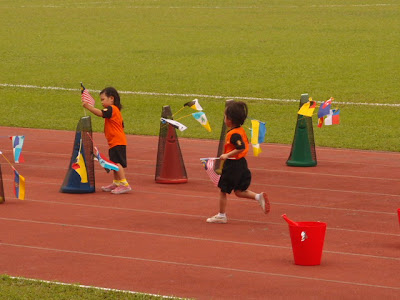 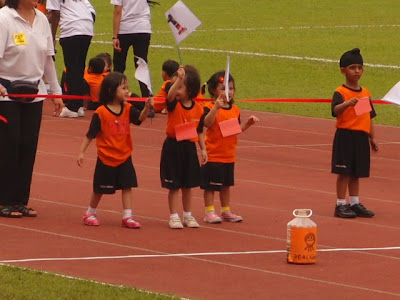 Her part was only about 3 minutes.  He he.  But I just felt soooo proud when I saw her running on the field with the flag!

Hers was not the winning team but medals were given to all participants  :)

Elyssa getting her first medal 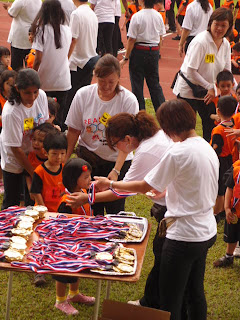 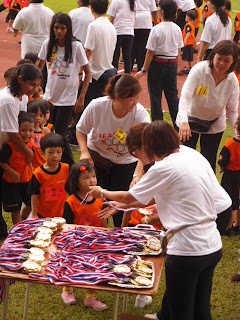 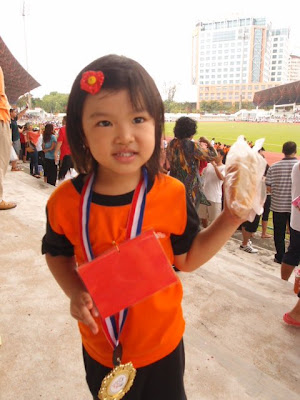 What a great event and experience!  Overall, I felt it was very well organised indeed.

Sigh, I see myself having to hold back tears a lot too. I wish there's some pill to help with this problem!

Wow the sports day at her kindy is so grand! How come so many people; her kindy has lots of students?

Ur princess is indeed growing. They grow too quickly don't you think?

Hey your gal also nose bleeding eh? heaty i guess. My son also for the 3rd time too. Elyssa's sports day is so grand...

Chi2 - Me too! I think I'll be crying at her school concert.
He he..I couldn't help laughing at the sausage bun comment too. I normally try not to give her sausage since its processed meat.

Melissa - so many students cos they combined with other kindies under the same brand. (it's part of a franchise). Agree they grow up much too fast.

Angeline - Ya loh, probably too heaty. Need to make her drink lots of water.
Come to think of it, I never had a sports day so grand in all my years of studying. And Elyssa is just four yeard old!

Luckily Elyssa made it to her Sports Day. Nowadays, grand events such as this seems to be a norm in most kindies. Need to impress the parents ma ;)

Wow, her sports day are organised at a stadium. That's grand!

What a "scare", just hours prior to her sports day! Just look at Elyssa...she's definitely grown so much! Such a grand sports day! Was impressed it came with a band too! Couldn't stop laughing at her sausage bun comment too! LOL!

Wow..such a grand event. Elyssa looks so happy in the pics.

Gwen will be having her fisrt sports day this Sat. I'm excited already.

Wow it is such a huge event! My lil girl is gonna go for her first run event with her daddy this Sun. We are super excited too!

Any Sports Day will definitely work up an appetite. A sausage bun is anytime nicer to eat than a medal. My niece is indeed very practical... Hip, hip, hooray!

Wow, the sport day is so grand... I like Chloe's comment about impressing parents, I never thought of it that way, but practical observation. I thought maybe also it's good the kids see bigger crowd and more fun with more kids.

Hope her nose bleed stopped. Vic was like that too. Blew our budget on ENT for nothing!

hhahaha...can't help laughing at the sausage bun :) i must say, that's a mighty grand sports day huh? glad Elyssa had loads of fun.

that's really cool! i haven't seen anything like that from Keira's kindy so far.