About a month ago, we attended the annual neighbourhood mid autumn party. Last year's party was a great success and we were really looking forward to it.

Last year, hubby's homemade lantern won the "Most Beautiful Lantern" prize. This year, he hoped to win again (or more like he said I WILL win!) and already had an idea about the material and pattern for the lantern. Unfortunately, poor fella fell sick few days before the event. Thus, no homemade lantern for Elyssa. We didn't even have time to buy a new lantern for her, so she made do with last year's lantern. No complaints from the princess though!

Some photos taken that night -

Elyssa and cousin Justin with their lanterns 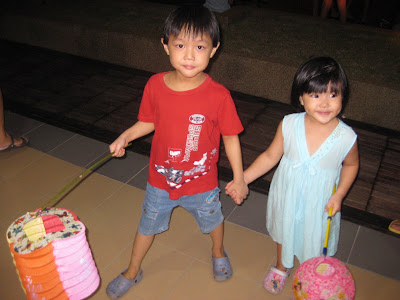 They joined the procession round the block 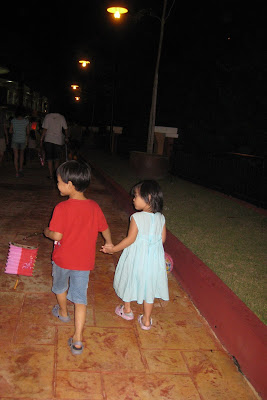 Justin met one of his classmates during the walk 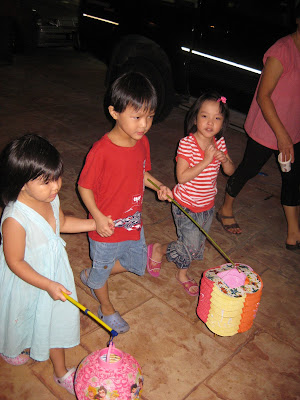 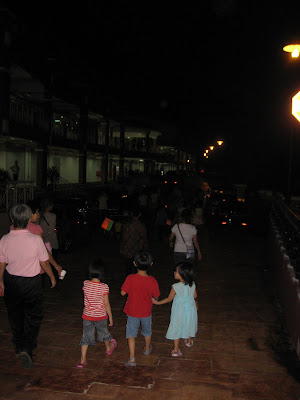 Forgot to take photos of the food. This year's celebration was a bit more chaotic due to the light rain almost throughout the event. Also, crowd turnout was much larger than expected. 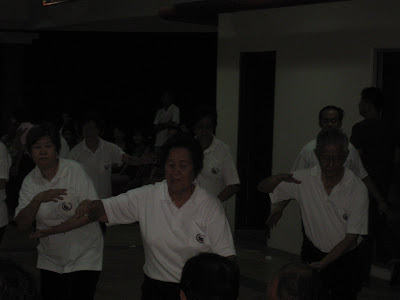 "Ah Mah" took part in the fan and line dancing presentation. We missed it cos hubby was feeling feverish and wanted to leave.
Elyssa cried and cried when we left cos she was looking forward to see Ah Mah dance! :(

Well, that's always next year!
And Erin mei-mei will be able to join in the fun. (this round, she was asleep in my sling most of the time)
Posted by Adrine at 10:49 AM

Ah Kong and Ah Mah is so active. They must have plenty of friends and never lonely :p

never too late dear :)
can wait for next year celebration!!

Too bad Daddy wasn't feeling well that day. At least Elyssa had a great time. :) Ah Kong and Ah Ma are so sporting and fit!

Chin Nee - I think they have no time to feel lonely since they take care of all FIVE grandkids during the day from Mon to Fri. Headache from too much noise (err...loudest is Elyssa) is more like it! He he.

If i am not mistaken...was it last year;s moon cake festival that ur hubs won for best lantern or something...??? wow time flies!

Elyssa and her princesses lantern are so cute!^^