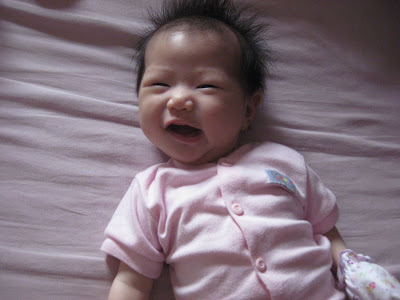 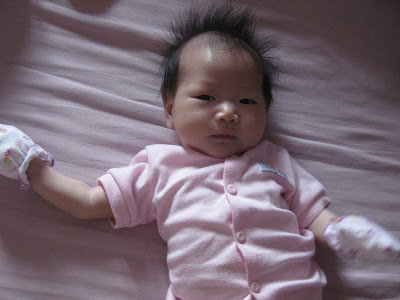 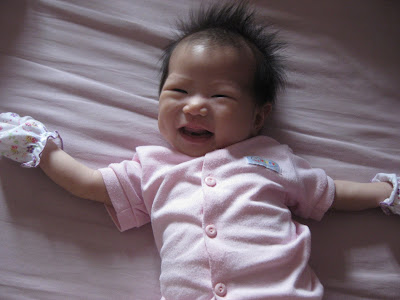 1. She loves it when people talk to her! And we love it when she smiles and coos in return.
I don't remember Elyssa being this responsive at this age. Hubby loves the way she responds and has officially named himself "Erin's Personal Clown". Speaking of names..... that makes me "Erin's Personal Cow". :)

2. A verrry light sleeper. She always wakes up whenever the auto gate opens. She's ok with white noises such as tv and people talking.

3. Physically, she doesn't have her jie jie's big eyes and deep dimples. But she's much fairer and has a small dimple on her right. She has "chang moh" hair i.e. hair that sticks up, just like me when I was a baby. :)
She has long fingers and toes, also just like me. Got potential to be a tall girl!

4. She has pulled her own hair a couple of times. Poor baby screamed while she pulled on a tuft of hair so tightly that it was difficult to unclench her little fist. I'm sure she had no idea it was self-inflicted pain!
Thus, need to make sure she has mittens on all the time. (ok, another reason for mittens is that mummy is too scared to cut her little nails)

Don;t worry about her hair...later when she grows up, frequently bring her to salon to cut, then slowly it will grow gradually! SO whne u gonna start working ?

I can cut her fingernails for her la. I experienced at 'grab-and-cut' by now.

Angeline - Actually, I love her "stand up" hair! ;)
Going back to work in 2 weeks time. Aiyo...really dreading it.

Chi2 - Ok, I subcon the fingernails cutting to you :)

So who will look after your kids when you start work! Bring lots of photos to your workplace.. I think it helps :)

long slender fingers? she is surely gonna be a very delicate girl :)

Adrine, the first pic of her smile is definitely your chop.... Hahahah... And long limbs potential to be tall girl, so more of your genes, good lar, got balance here.

William used to be very sensitive to auto gate opening and even padlock sound, so I have to sneak out like a burglar those days. Have you started working? Hope bb can adjust.

Erin is such a smiley baby! Just look at those smiles...melts my heart away instantly! Like how her hair "changs". So cute!

I like her hair...so adorable. :) As a matter of fact, Erin do have long limbs and legs. Tall like Mummy...good lah.