Besides Berastagi, the only other sightseeing place we went in Medan was to Maimoon Palace, built by the Sultan of Deli.

Rather well preserved but there was NOT a single board/sign/person explaining the history of the palace. 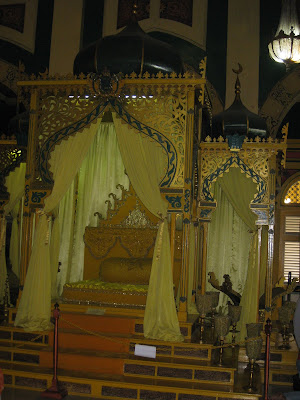 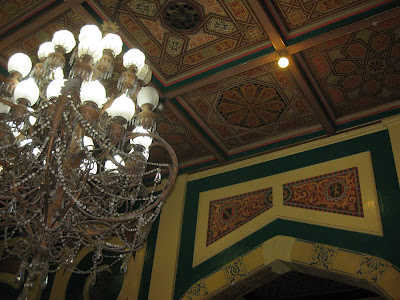 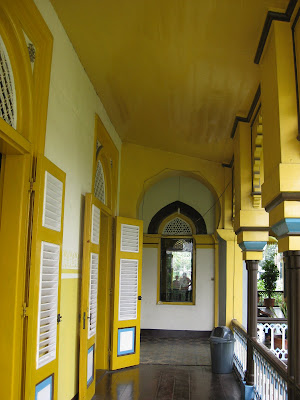 As usual when it comes to visiting historical sites, Elyssa will be sound asleep! 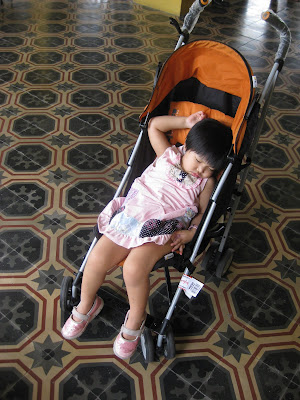 Some of the food we had - 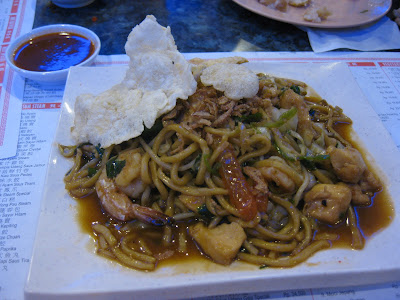 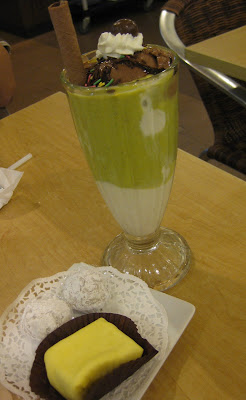 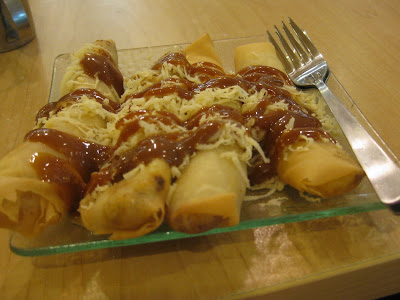 On our first night, we decided to try out Nasi Padang near the hotel. First time eating and we were surprised at the number of dishes brought out for just the 3 of us!

Later discovered that we could just take what we wanted and leave the rest. (not dim sum style either, where you must take the whole plate. For nasi padang, if there's say 5 pieces of beef curry in a plate, can just take and pay for 2 pieces, leaving the other 3 pieces behind). Interesting concept, but seems so unhygienic!!! The same food item could have been served many times previously and what if the previous customers played around/touched the food with their own utensils????

In the end, we only took fried fish and fried chicken. Dare not touch the curries and mashed vegetables! The fried chicken was one of the best I've tasted though - crispy on the outside, tender on the inside. Yummy! 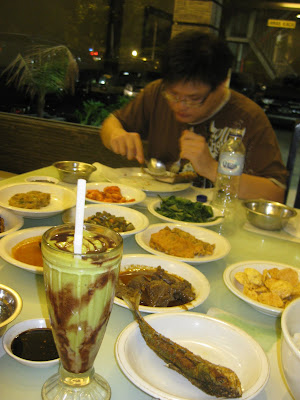 Food collection of what we didn't eat in the end. Rather impressive skills to carry 10 plates in one hand eh?
(but again, there's another unhygienic point - the base of the plate which had touched the table and dunno what else, actually touches the food items on the plates below it) 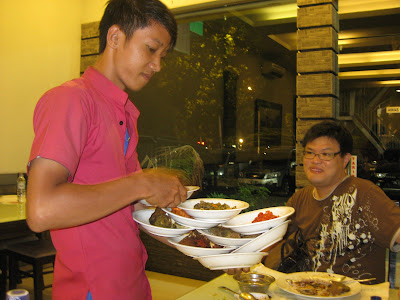 For dinner on our last night, we had Nasi Padang again with hubby's colleagues. Didn't feel the "unhygenic" factor so much since we finished the 10+ plates among the 8 of us on our table (so it feels like a normal meal), but of course what remained questionable was where the food items had been BEFORE being served to us!!! But just close one eye and eat lah...... 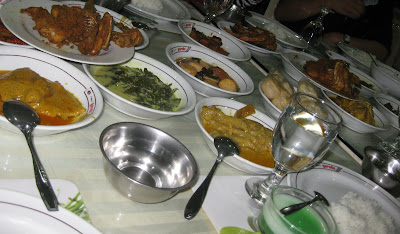 interesting...you mean take the food away to where? and leave the rest for the next customer?

Alice - they put back the leftover food into the common serving trays/ curry pots to be scooped up again for the next customer. Got the "ewwww!!" factor eh?? ;)

oh yes the food sure has the "ewww" factor :P

nasi padang concept memang like tat..but lately some of them dah tukar concept, more hygiene..
just choose from display whatever u want to eat..

If no stomachache that means ok la. Nasi padang style is common practice so that must mean few incidences of stomachache.

eeesshhh! I can understand the unhygienic part... I seriously beh tahan, but if hungry... dun think abt it.. jst eat.

Yalor... I can imagine before you guys how many ppl has touched the dishes liao!>_<

Anyway, nice scenery and great spread of food though!

BH like nasi padang, u know. He likes Sari Ratu, there's one in Subang Parade. Personally I've not tried it