We went for a short weekend getaway at Melaka last weekend. Mainly cos hubby felt the urge to go for a holiday since he was quarantined at home during CNY.

One of the things that I was looking forward to was Elyssa's first swim in the hotel swimming pool. I couldn't find my swimming suit when I packed, so I bought one in Mahkota Parade. Got Elyssa a cute 2 piece swim suit as well, since it was on discount. In the evening, we got ourselves and Elyssa all geared up for her first swim. Went to the pool, signed up for towels then we stepped into the water. My goodness..... the water was soooooo cold !!! *Sigh*, so we had to go up to the room again. And since were were all dressed up, what to do..... sat in the bath tub loh...... ha hahh... Elyssa actually had a good time splashing water in her "mini" swimming pool :)
.
Went to the Portugese Settlement for dinner then Jonker Street after that. Jonker Street was really packed. Luckily it was a cool and windy night. The next morning, we lazed around then went for another round of shopping at Pahlawan Square before heading back to KL around 5pm.
.
One thing I noticed during the trip was that DSLRs seem to be the "in" thing. Saw at least 7 groups/pairs shooting here and there, during our short trip. Alas... I couldn't join in as hubby left mine at home. (aarghhhh!!!) I don't like having a post without a photo, so here's one taken with his handphone. I like the old-style high chair here- 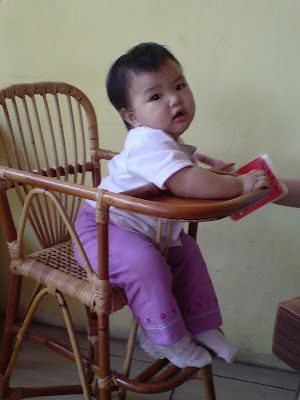 Aiyoh. She is just so cute. Nice to have a holiday. I wish I could go for another soon..sigh. And I would love to have a DSL too but with times like this, emmm...just dream on....

ahhh... malacca.. my hometown... n u know what? i've NEVER been to portugese settlement before! haha..