After almost 6 days of persistent fever, Erin was admitted to the hospital recently.   :(
My poor baby!
On her hospital bed
I expected a wailing scene when the nurses poked her hand to draw blood and for the drip. But Erin was just so, so brave. She struggled a bit toward the end of the procedure (nurses took TWO vials of blood) but she hardly made a sound or cried. So proud of her! 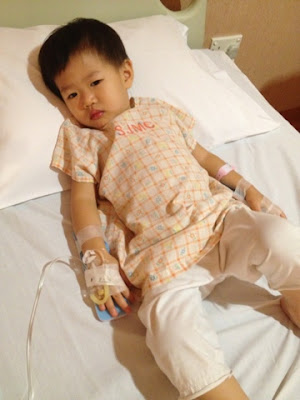 Both hands with plaster and board
*Sigh*, so sad to see my poor baby like that. Nurses plastered her left hand as well to prevent her from pulling the tube from her right hand.  Surprisingly, Erin wasn't very disturbed by the boards. On the next day, she could even comfortably play games on the Ipad using her two free thumbs. 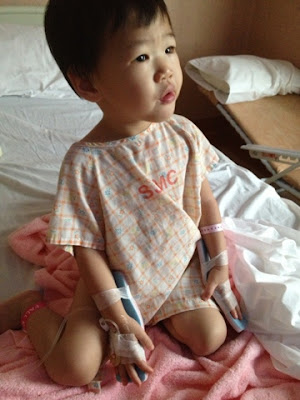 Her admission was around 11pm on Monday night. Still had fever on-and-off and it spiked again on Tuesday morning.  When the doctor came to check on Tuesday, she did not give the green light for discharge, so we had to stay on for another night.
Both hubby and I stayed in the hospital with her, while Elyssa stayed over at Ah Kong and Ah Mah's house.
Going for a walk in the ward 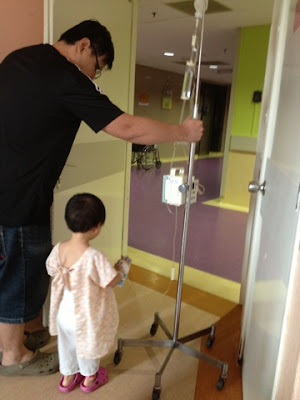 Luckily, she didn't have any fever on Tuesday afternoon onwards and on Wednesday morning, doctor said she could be discharged.  Yay!
Happy with her balloon
The tube was removed around 11pm on Tuesday. The 3 of us went downstairs for breakfast @ Subway the following morning and she happily chose her Hello Kitty balloon right after that. 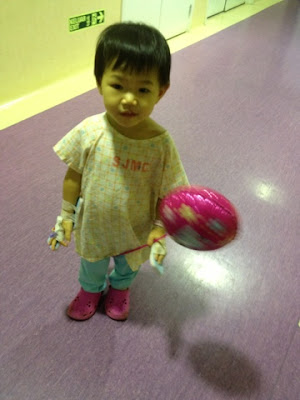 And what was the diagnosis?  Nothing conclusive actually. Dengue ruled out. Urine results showed no infection. So, the general term "viral fever" was used. She was put on drips for about 24 hours with 1 dosage of antibiotic into the last round of drips as well as standard oral paracetamol every 4-6 hours.
A part of me still thinks the fever would have ran its course anyway and the hospital stay could have been avoided. But then again, I suppose it's better to be safe than sorry. (and hubby who's Mr Panicky would have driven himself crazeee with worry!)
Posted by Adrine at 11:06 PM

Yes better be safe than sorry. Glad she is fine now

When you said fever...asked the doctor why and what happen. Nowadays they always say the same thing "Viral fever"

This type of fever realy make people scary. Because it prolong more than 5 days sometimes last for 2 weeks also got.

Glad she is fine now.

Yup better to be safer than sorry esp since it was on for 6 days straight before the hosp stay. Glad that she's recovered now.

So sad to see little kids like Erin as a patient in the hospital. Thank god she's ok already.

oh poor baby. was the fever very high? i remember the time when ashley was a toddler and she had viral fever which lasted a week and the fever was hovering around between 38 to 39 Deg Celsius. Glad that Erin is better now.

Poor Erin. Mthough pitiful she looks, she still look cute with the drip by her side. Glad it's not dengue otherwise a whole new set of headache. Give her yogurt to replenish good bacteria now after the antibiotic. Take care.

Glad to know Erin is fine now. Poor girl had to endure the pokey needles. She was really brave though.