Another month has passed.... baby Erin is now 5 months old ! 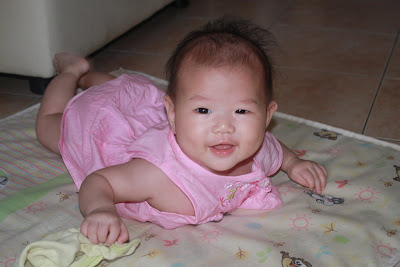 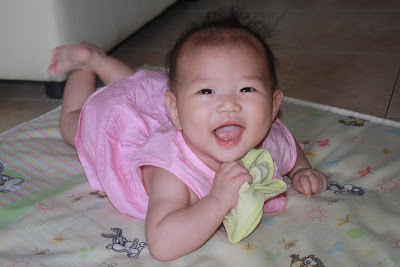 2.She still smiles a lot, though slightly less than a month ago. She loves to "talk" i.e. shriek away in a high pitch voice when someone talks to her.

3. She knows how to grab things now.

5. Had her first taste of medicine last month due to slight fever and flu. Luckily nothing serious.
(I was a bit surprised though. Thought breast milk should give her better immune system. Elyssa jie jie had much less breast milk but has a stronger immune system.
But one common thing with jie jie is that Erin seemed to enjoy the medicine. ha ha)

6. She loves it when I blow into her belly button. Normally chuckles in glee!
Posted by Adrine at 8:36 PM

You are doing a great job mama, Don't stress too much about breastfeeding. I have a question..Do you pump in in the wee hours morning cause I find that I produce a lot of milk then. What kind of pump are you using because I read somewhere your pump is very important and it should mimic your baby's sucking..

Keep up the great job..Baby Erin is adorable!!!

BB Erin has your smile Adrine. So have she wears all the dress you bought from Vietnam? I still remember you bought quite alot from there...hehehe

N's mummy - I set my alarm clock at 6.45am and if Erin wakes up anytime before that, I just nurse her while lying down (with my eyes shut!). I think she tends to wake up around 5ish these days which could explain why I can't pump out much when I wake up. She used to wake up around 3ish which was better cos it gave me time to "refill". I have contemplated waking her up at 3am but decided not to cos tot I shld be encouraging her to sleep thru the nite rather than the reverse. (ok, partially coz I need my 7 hrs of sleep so that I can focus in the office. He he.)
I'm using an Avent single automatic.

Angeline - you have good memory! Actually, the pink dress that she's wearing in the photo is from Vietnam.

Agree with Miracles. Good job on the breastfeeding. Immune wise, each child is different but generally she should be stronger and more resistant to allergies. Love her smile and complexion!

I really very pui took you! It is very difficult to work full time and so persistent to BF your baby.

I am learning everyday and have good and bad times!!

I read somewhere and my OB actually told me that you produce the most milk mid morning. Since Baby Erin don't nurse at 3ish maybe you can pump for 15 minutes. Are you using a dual pump or single? I usual pump for 15minutes if N didn't wake up and nurse but it sucks for you because you have to work the next morning to wake up and pump. It all depends on what you want to do. That was the time I will get 5oz actually. then it'll be great when baby erin gets up and nurse 5/6 am. If you have a dual pump that would make it so much easier to pump too. I'm not too sure about avent pump because I have a madela and have only read reviews on them.

Not sure if what I said will be helpful to you just though I share what I've learn cause I know it sucks for me when I have questions and I'm clueless.

Such a cheerful cutie pie!

She is so adorable. :) I think she is developing really well. She drinks alot too which is great. Don't stress about breast feeding.

Wow, Erin drinks quite a lot of milk eh? Getting flu is 'good'! It is preparing her body to accept the flu and other viruses, thus strengthening her immune system. Just read an article in the Star papers today, saying the same thing. Even vitamins and meds are not as good as the 'real life training' that the body goes thru when they fight off viruses and bacteria :)

Reading ur comment to one of the question here makes me remember again another step I did to increase milk supply, I woke up in the middle of the nite to pump even tho baby is sleeping. Totally forgotten bout that. N bout breast milk increases immunity, not quite also. Jensen have to take panadol even before he was one month old. Got the virus from Justin. N bear in mind, Justin have bad eczema n Jensen seems to be having eczema spot now n he do get sick pretty often.

Wow she really looks so adorable :) It's the season nowadays.. so many kids falling ill. And the parents too haha. My girl as been sick on and off for the last few months too :/

OMG! Baby Erin has an enchanting smile. She is a cutie pie!