Hubby and I had a good laugh when we saw Elyssa's sleeping position a few nights ago.

A very unflattering position indeed with her butt sticking so high up, plus she was wearing one of her "auntie" looking pyjamas pants. Ha hahhhhhh !!!!!!! 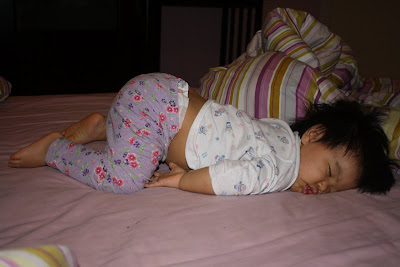 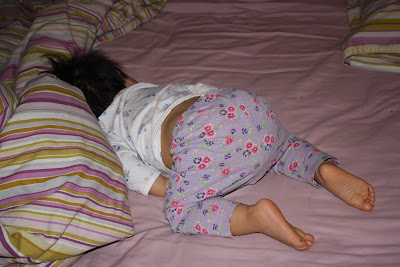 We had an early start last Sunday by going to a birthday picnic organised by a mummy blogger, Chin Nee at the TTDI park. The picnic was at a wonderful shady spot with a shallow stream. Perfect for small kids! I'll definitely go again next time.

Pic of the picnic spot - 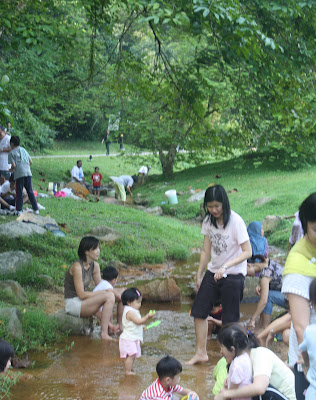 It was Elyssa's first experience standing in the stream and she didn't fancy it at all. Just look at her face! ;) 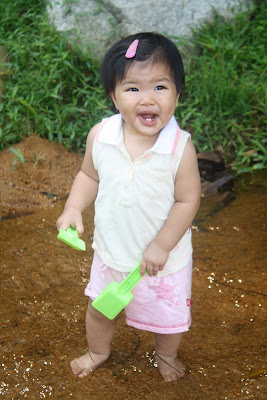 After a while, we decided to bring her to the nearby playground instead. She enjoyed that much more! Some pics taken - 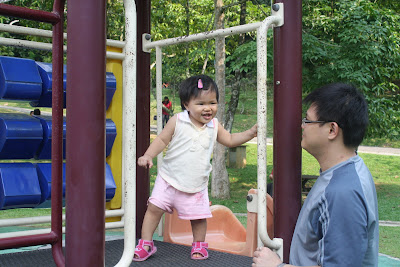 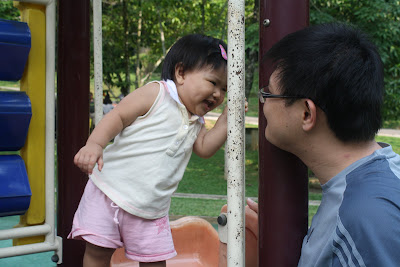 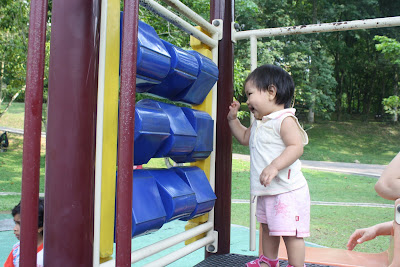 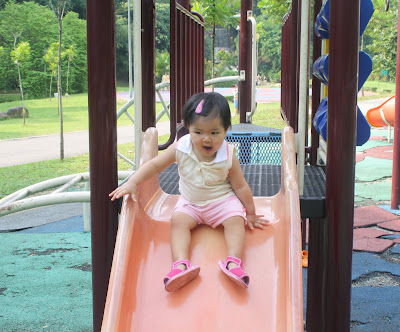 " Yay....... time to slide down now"
We ended up spending more time at the playground instead of by the stream where the actual picnic was. (what to do...... have to follow what the "little boss" wants!) But it was nice to finally meet some of the mummy bloggers in person. I also found out that one of the bloggers whom I thought looked familiar worked in the same company as I did many, many years ago. Such a small world.

After the morning picnic, we met up for lunch at a nearby organic cafe with my friend Mun Sean, her hubby and their adorable son Nicholas. Wanted to take a nice photo of the 2 kids but it was an impossible task. Ha hah...... hard enough to take a photo of one kid but with TWO, I gave up after a while.

The only close-to decent photo I had - 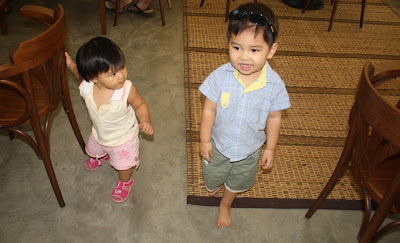 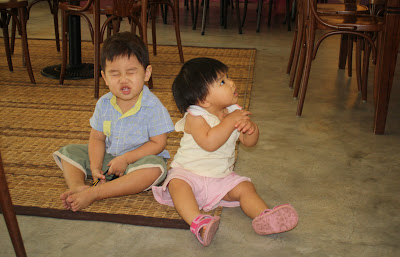 After lunch we went to Amcorp Mall because hubby wanted to search for his second hand CDs. Not my favourite place to go but I gave in since it was Father's Day.

That night we had a Father's Day dinner for my father with the rest of the family. No pics as I forgot my camera.

When we go out for meals, sometimes all I ask for is just 10 minutes for Elyssa to sit down quietly so that I can eat in peace. One of the best way to make her sit down is with what else........ but food. If she has eaten her porridge, I'll usually let her have something from our plate like rice or raw cucumber.

Took some photos using the camera phone when we were in Sushi King recently. Just look at the grains of rice all over her chin! 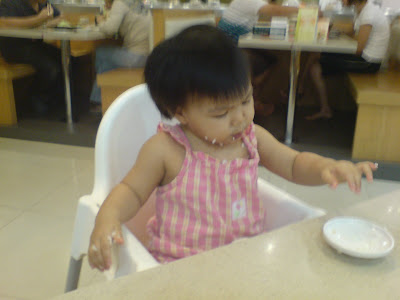 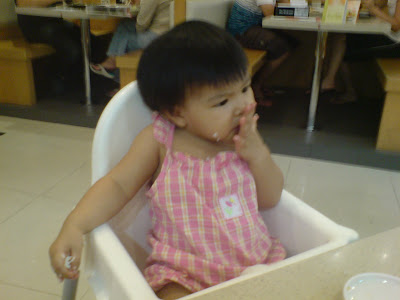 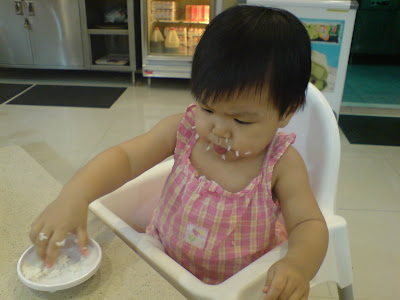 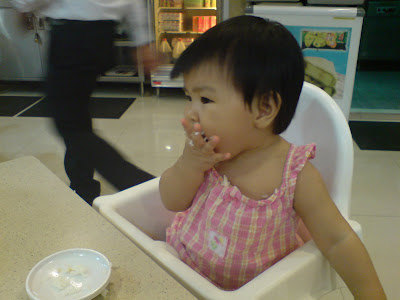 Shopping Carts - Dirtier Than You Think

I got a forwarded email from a friend today which really caught my attention. Here are some of the main points from the email about shopping carts/trolleys in supermarkets -

1. Handles of shopping carts in stores are worse than handles of public toilets!!

2. Studies have shown that there are 1 million germs in just one shopping cart handle.

3. Shopping carts are exposed to bacteria and germs via sources such as meat or poultry, children while sitting on carts and other consumers illnesses.

4. Why worse than public toilets? Because toilets are cleaned and disinfected regularly but shopping carts are not. In fact, most supermarkets only clean their carts a few times a year.

5. What should you do? i) wash hands upon completion of shopping and/ or ii) use wet wipes to clean handles before using.


Dirtier than handles of public toilets???? Ewwwww !!! And to think that Elyssa sometimes chew on the handles when I'm not looking. But then again, this study was not done in Malaysia so the comparison might not be so accurate since our public toilets are probably dirtier.
Anyhow, still better to be careful and use wet wipes next time.
____

On a totally separate note from disgusting shopping trolleys - I thought I might as well post a photo since I'm already writing this entry. This photo was taken the same time as the batch of photos in my previous entry.

Really show's what a "monkey" she can be. Somemore with hair flying everywhere! :) 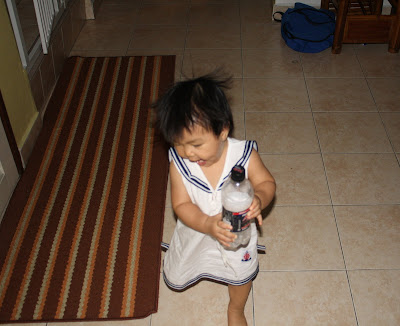 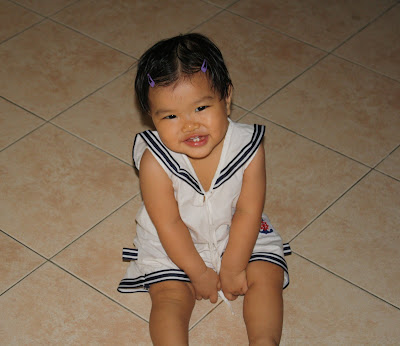 About her -
1. Weight : 10.5 kg
Teeth : 3 at the top with one more peeking out, 2 at the bottom
Food intake : 6oz milk 3 times a day, porridge twice a day.
2. My mum has thought her to sit down whenever she eats or drinks her milk. Surprisingly, she has been very obedient on that. If she walks towards me while drinking and I say "sit down", she'll immediately sit down.
3. She uses her new skill to her advantage though. Whenever she sees someone eating or opening a packet of food, she'll immediately sit down in front of the person and then point to the food. Ha hahh.... smart tactic. Since she's "so good" to sit down like that, we normally give in!!
I still remember one funny incident - my family members were sitting down on the floor while chatting away and passing a packet of food. Elyssa practically "followed" the food !! Each time the packet was passed to someone, she walked to the person then sat down right in front of him/her. Ha hahh!!
4. She seems to be going darker as she gets older : (
She was never really fair in the first place, but not this dark either. It's not like she has been getting more exposure to the sun lately so I guess it's just a natural process.
*Sigh* lately I've been getting comments from others about how dark she is.
5. She surprised us last week when she took my mum's egg beater then proceeded to dribble her red plastic toy apple all over the living area! She has never seen hockey before so it was nice to see her being creative.
__
She gave me plenty of smiles when I took her photos for this month's update. I can't decide which one I like best, so here's a few more :) 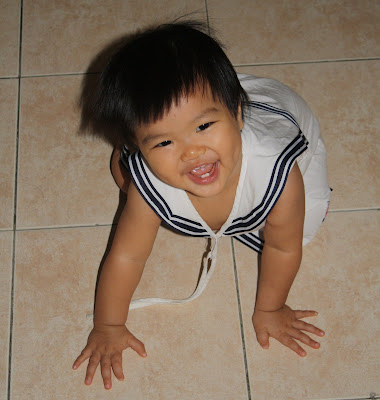 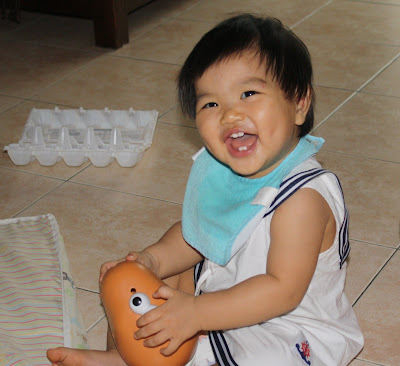 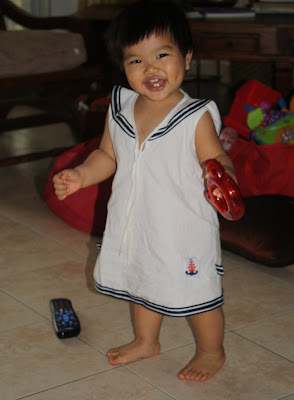 I haven't blogged much since I started my new job on June 1. Learning new things is pretty tiring and I usually don't feel like switching on the computer again after work.
.
So just a quick post today to get myself "kick-started" again. These are some photos taken in the playground last weekend-
. 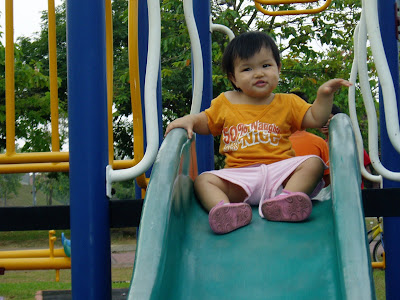 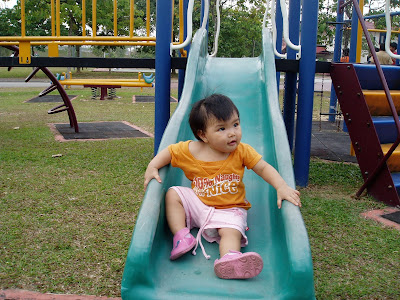 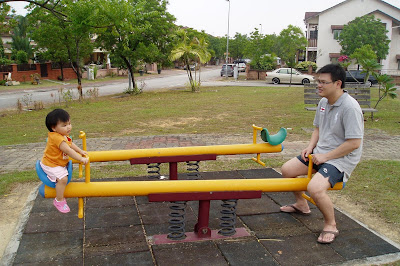 "Daddy, aren't you a little too big to sit on this?" 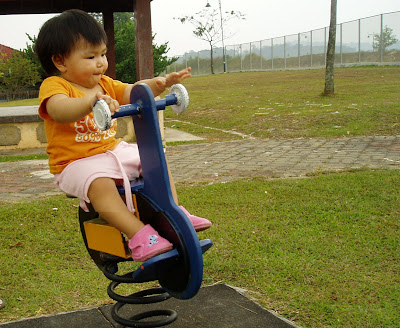 " Check out my first motorbike !"

Hubby bought some shelves last week. While he was busy fixing up the shelves at home, the little "kay poh chee" (busy body) was so happy to "help" her daddy !!!
. 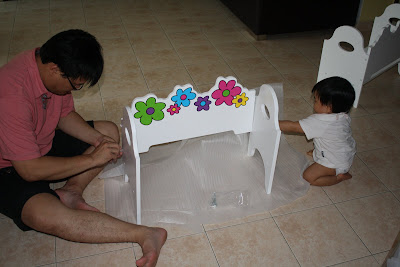 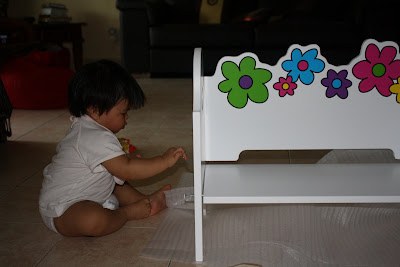 "Then fix the bottom" 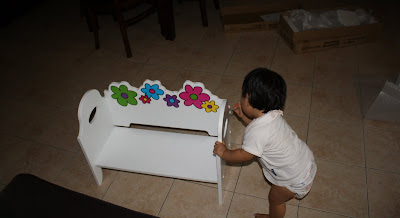 But of course the little helper created more headache for daddy since she kept getting in the way and kept taking the allen key from him. Ha hahhh.....!!!