Went to Jungle Gym sometime in October last year ( yup, another backdated post!)  It was actually in conjunction with a meet-up with 2 of my friends. We each have 2 kids around the same age so this was a good venue.  We get to chat-chat-chat, while the kids get to play-play-play  :-)  Not cheap at around RM50 PER KID though. 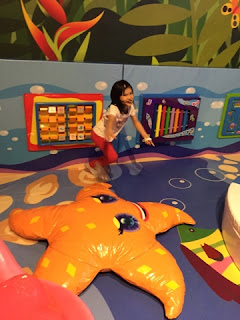 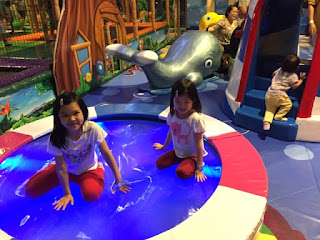 Giant slide!
They went down this slide a couple of times. I was surprised Erin wanted to try. 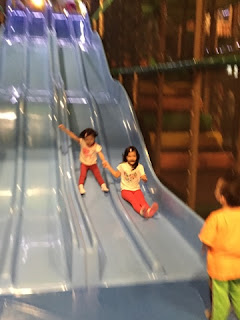 Going down another smaller slide 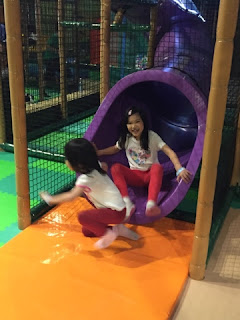 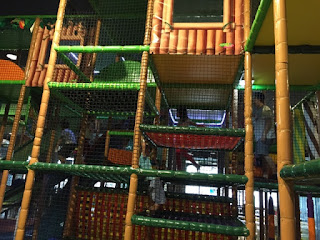 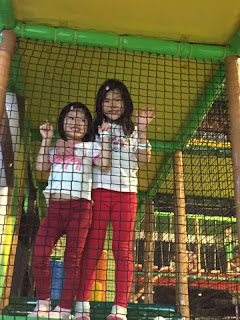 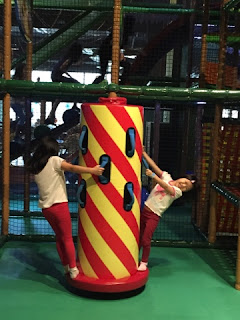 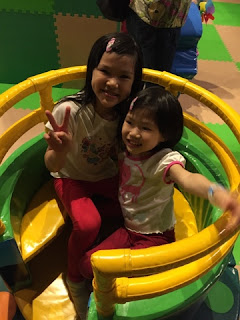 Monkeys in a coconut tree  :-) 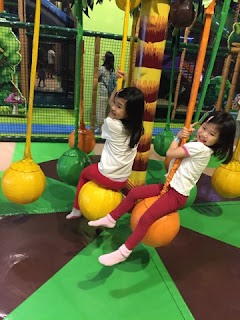 This kiasu mummy let the kids play from around 10am to 6pm! haha. Make the admission fee more worth it!  My friends had to leave around 4pm but we stayed on for a while longer.  While the girls played, I managed to work on my latest crochet project as well  :-) 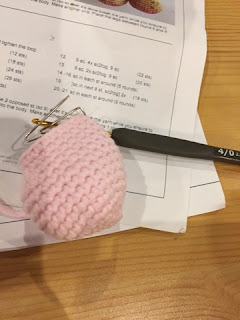 
Big smiles for their first day :-) 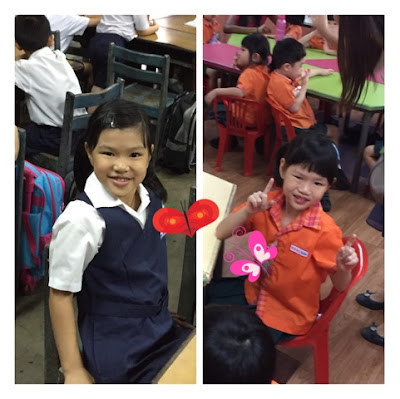 Elyssa's update
I was thrilled that her class teacher last year will be her class teacher again. Yay!!!!!   I really like the teacher and have written about it here and here  :-)   Daily updates in the whatsapp group continued until end of school year.  Love the dedication!

First day of school was uneventful. I parked my car and brought her into school. Bumped into my friend and when we said our hellos, Elyssa confidently just walked on.  So I followed behind her while she walked through the corridors to her classroom (her teacher already sent whatsapp earlier about classroom info), found a place to sit and then started chatting with her old friends. That was quick!!!  Hehe...I could have just dropped her off at the school gate!

So far so good for her first week. Some change in subject teachers (she prefers the new teachers, so that's good news) and on Friday she told me she enjoys school. I asked her why and she replied with a big grin : "Because for this whole week, teacher didn't beat me!!!"   I was like....uhm???????  Asked further and she said no lar, teacher typically beats really soft unless some boys are really naughty.   Okayyyyy.  Anyway, for the whole of Standard 1, she got hit lightly on the palm twice only (for forgetting her books) which is considered good for chinese school already.  hehe.

Minimal homework so far and she's happy in school, so I'm happy too  :-)


Erin's update
New kindy for Erin this year! She never really liked her old kindy and it was such a dread to send her to kindy every morning.  At one stage, I even considered pulling her out completely but in the end, we just continued till end of school term.

So, new beginnings for her!  I was both excited and worried. To get her all excited for kindy, we bought her a new Tinkerbell trolley bag, a new pencil case and even a new water bottle :-)

First day of school went ok! Chinese medium so she probably didn't understand what her teacher was saying half the time, but she did join in when the teacher taught them hand actions for a song. Parents shoo'ed out after a while, so I didn't know what happened after that. When I picked her up, she was all smiles so I was relieved!

Only 3 days of school in the first week, and so far so good. Then again, she was also fine during her first week of kindy last time, so fingers crossed that she will like her new kindy for the whole year!
Posted by Adrine at 5:45 PM 6 comments: