Elyssa just had her 2nd Kindy Concert last weekend. Just like last year, she didn't want me to show her dance steps before the concert.  Kept on telling me....."Mummy, you see on the actual day!"  Suspense only!!

She brought home her concert costume on the Friday before the concert. I absolutely loved it!  Much, much better than the green shiny bling-bling costume last year. (which is still hanging untouched in the cupboard)

Chinese or Korean Costume?
Looks Korean to me! She insisted it was a "Mandarin Costume" 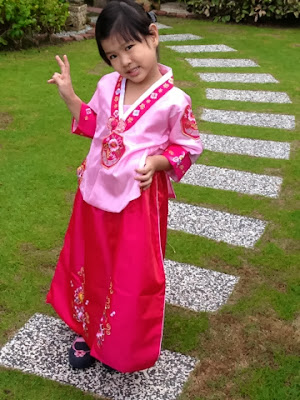 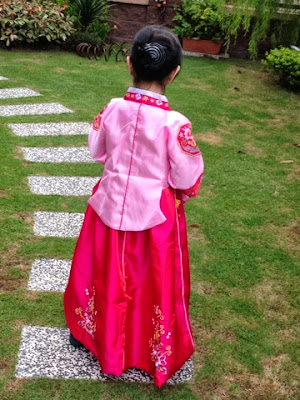 Actual Performance
She was right - it was a Chinese dance afterall.  See... there's even a "Chinese Emperor" (she later said that's her swimming teacher)

I couldn't help grinning throughout the whole performance. She did so well! She remembered all her dance steps but unlike last year, she looked like she was enjoying it  :-) 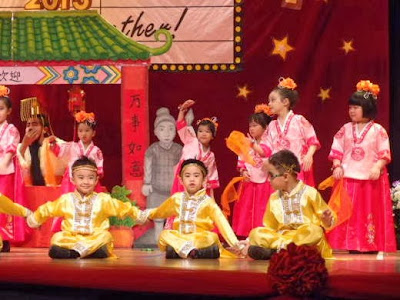 Looking so demure with the orange scarf
When the performance ended, my SIL and I shouted "ELYSSA!!!" on top of our lungs.  Hee hee.... so super proud of her!  :) 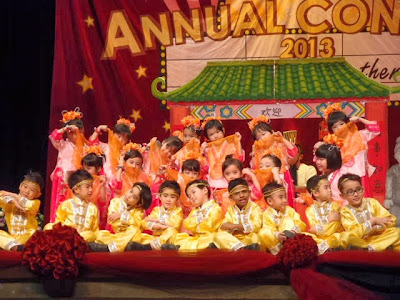 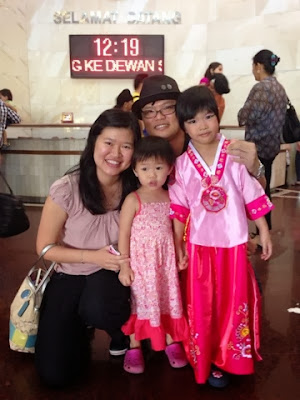 Sisters
I love they way they are holding hands in this photo :-) 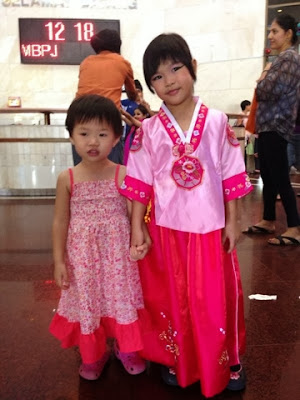 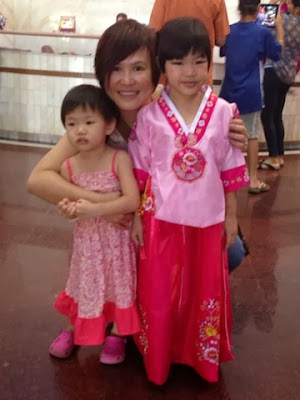 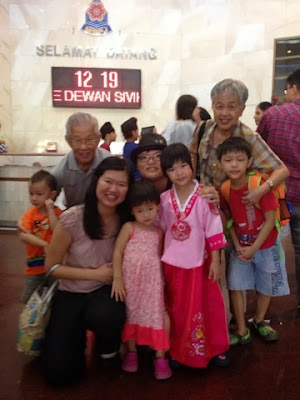 Compared to last year, I felt the overall concert performance for the kindy was not as good. There were some unnecessary draggy narrations this year.
But in terms of Elyssa's class performance, I liked this year's wayyy better - loved the costume, theme, music score and choreography. I'm a happy mummy!

Can't wait for the official photos and video  :-)

We went for short holiday in Penang recently. Or more like few weekends ago. Just don't have the time to sit down to blog these days! Erin is taking much longer to sleep nowadays. Instead of being fast asleep around 10pm, this girl now wants to go downstairs to play with her toys and then bring up her toys one-by-one, sometimes up to almost 12am.  Sometimes, I doze off while waiting for her to come back upstairs. And then wake up to find assorted things like a beach ball, some naked Barbie dolls, a plastic hair dryer etc etc next to me.  Haiyoh.....

Anyway, back to our Penang trip. Got plenty of photos in my phone, but here are the ones for Bukit Bendera : 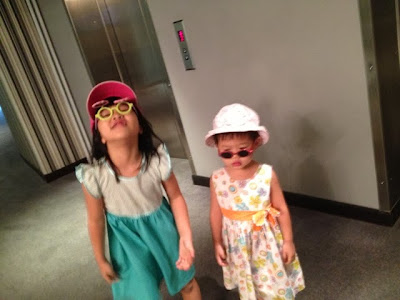 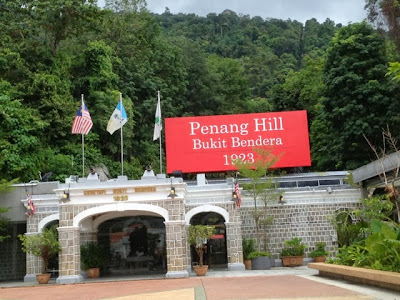 New Train to go up
Gotta be careful though! While we were asking the guard whether we could still enter the carriage (only standing space available), Elyssa suddenly screamed cos her right leg fell in between the gap of the train and stairs. We quickly pulled her up - luckily no injuries but she was in shock for a while. 3 girls who were sitting on the bench practically jumped up and offered to let us sit. (caring Malaysians still exist. Yay!) By the time we reached the top of the hill, Elyssa was back to her normal self already. 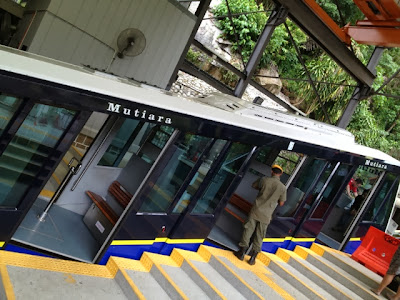 Posing with some owls 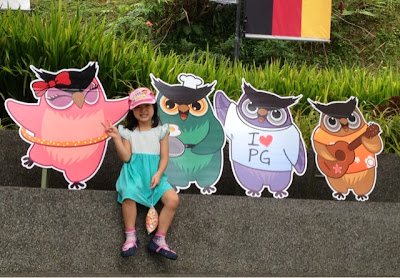 ﻿
Nothing much to see at the top of the hill. We decided to have a leisurely lunch at David Brown's Restaurant.  Ended up spending almost 2 hours there. 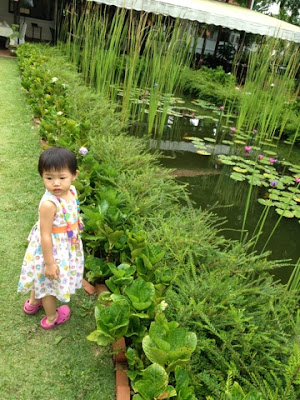 Girls enjoyed the garden while we waited for our food. Weather was nice. 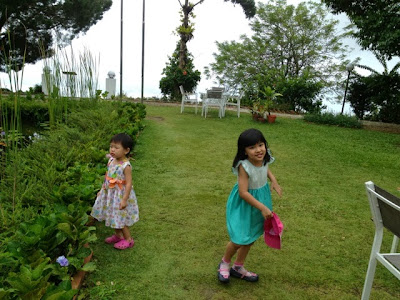 Lunch is served!
Edible but nothing great. Definitely overpriced. 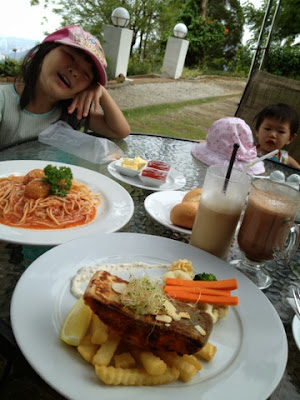 Luckily the nice surroundings made up for the food quality. 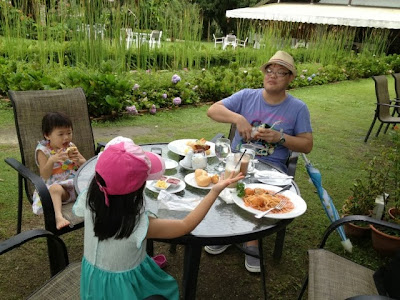 Some pretty flowers from the garden 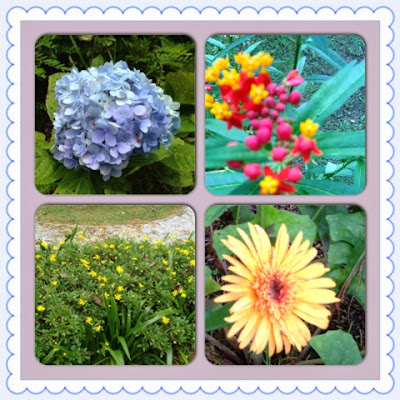 After the leisurely lunch, we walked around a bit then took the train down.
We got first row seats on the first carriage. Nice! 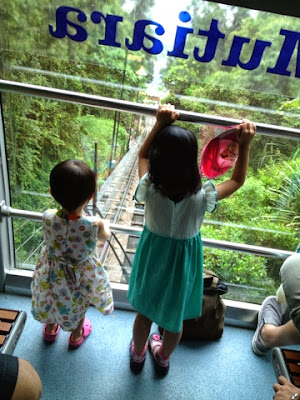 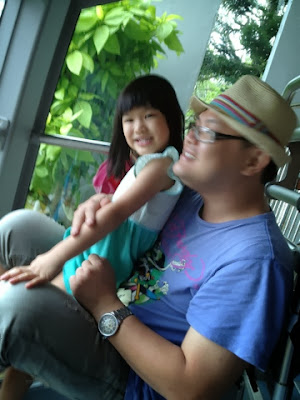