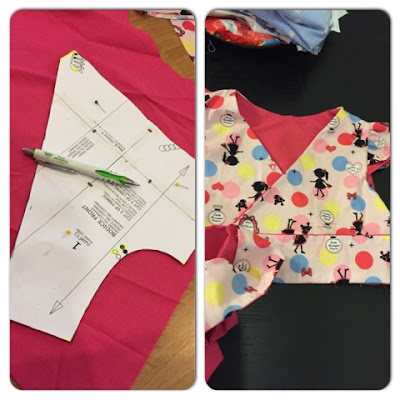 Ta Daaaa!!!!
Did this dress in record time which is 4 days (not full time la) over the long labour day weekend. 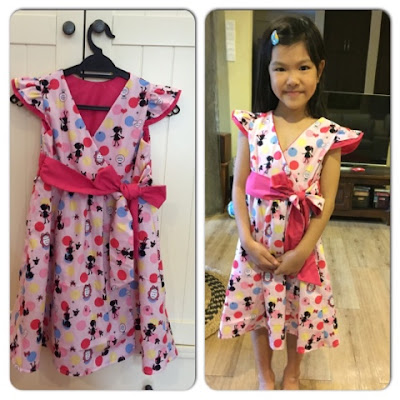 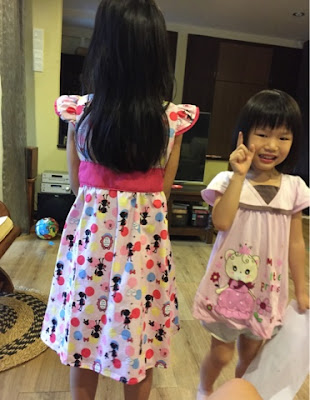 My last 2 major projects were these:


Dress for Erin
This dress took me slightly over 2 months!  Took me two weeks to finish 80% of the dress, then stopped for weeks and weeks, then just one last weekend to complete the final 20%.  Busy, busy, plus I tend to have this habit of losing interest in a project halfway.... aiks.  (hence I gave myself the 4 day timeline for the pink dress above. hehe) 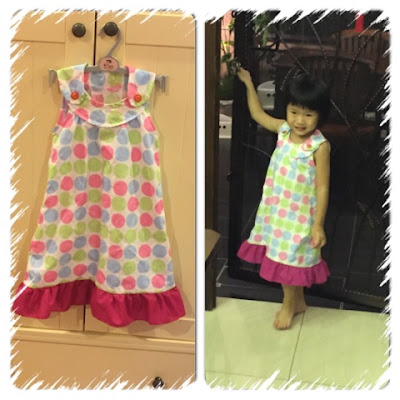 Oh, I picked up crocheting as well.  Did my very first scarf project :-)   Took about 2 months as well. 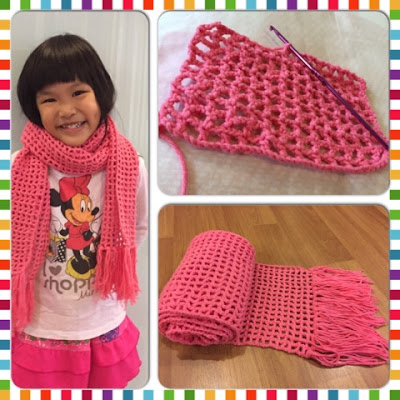 We had a belated Mother's Day dinner for our mum recently. Belated by almost one month actually  ;-)   Dinner was at Awet Thai in Ara Damansara.

Here are some food photos, pinched from my sis's blog -


Grilled Cockles, Mieng kam, Baked Crabs and Baked Prawns
Funny thing about the mieng kam -When the plate arrived, my dad said : "What is that? I've never had that before.  And my mum said : "Oh, I love this! I've eaten that quite a few times already". And they were both surprised how come the other person tried/ haven't tried the dish before.  Wuakakaka! 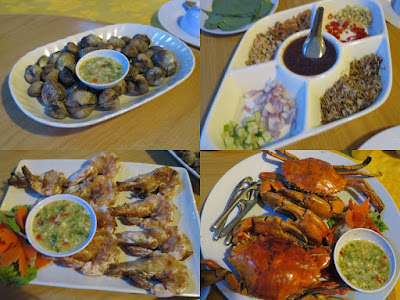 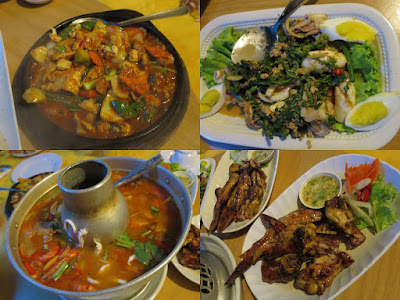 Food was yummy!  And I've discovered a great way of having photos without having to stop greedily shoving food into my mouth - just hiss at someone else to take photo. Whee he hee.  All food photos were shamelessly pinched from my sis's blog.  ;-)

After dinner, we tried to take grandparents with grandkids photos....

Erin went to happily sit on Ah Mah's lap
At that point, I tot we may be able to replicate the grandkid #1,#2 etc photos taken last time
http://elyssachong.blogspot.com/2012/08/fathers-70th-birthday.html 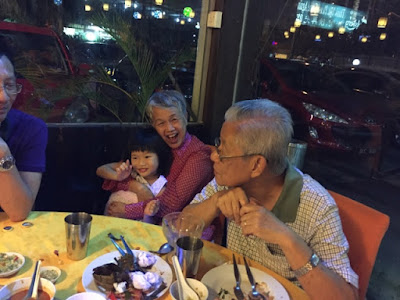 But uhm.... no, they started playing hide and sick with the camera. (should have taken a photo of that. heh)

Anyway, only managed to get a few decent photos -


With 4 grandkids
See how Erin has her arms tightly around Jensen??  Adoi.
Will write more about that next time. 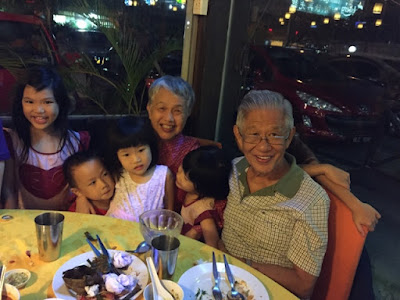 Best photo we managed. Minus one grandkid and plus one adult  ;-) 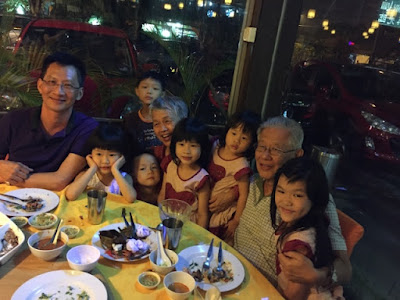 
The little boy from the next table kept staring at them and after a while, he came to play as well.  He was at a family dinner too, but he was the only kid among all the adults. Really grateful that my 2 girls have so many cousins to play with :-) 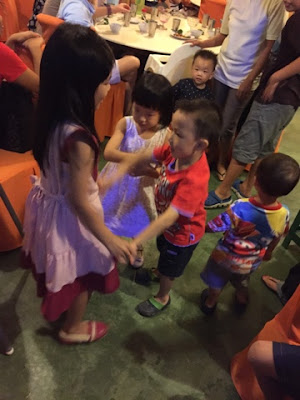 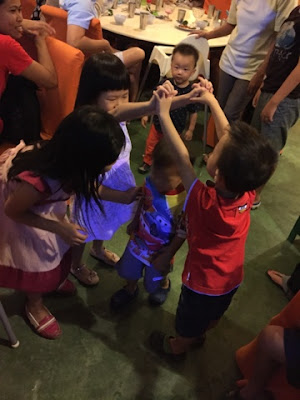 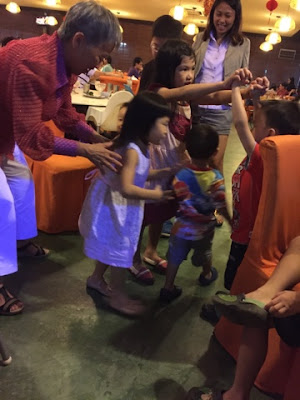 Looks like we'll add Awet Thai to our list of acceptable venues for family ocassions.  Oh, my brother and I went for the Great Eastern 12km run the next morning.  Note to self - do not have spicy Thai dinner before a run :-0
Happy Mother's / Grandmother's Day!
Posted by Adrine at 11:21 AM 2 comments:

Erin's One to Ten

Just penning this down, before I forget. This is how Erin counts from One to Ten: 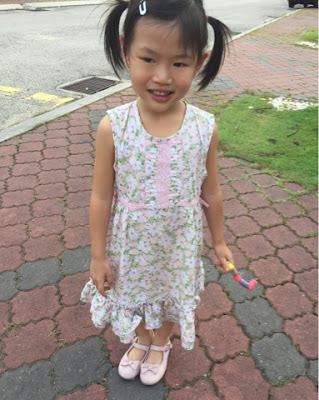 Her "yeS" is almost perfect now (instead of "yEA") but not so much progress in other areas.  She loves to talk tho! She can go on and on but sometimes we can't quite get what she says. *sigh*
Posted by Adrine at 9:22 AM 2 comments:

Elyssa started Gymnastics at her school early this year. About 2 months ago, she went for her very first competition. 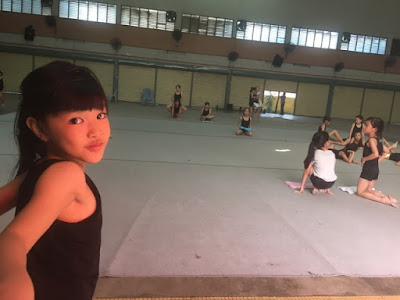 All glam-ed up on Competition Day!
Hers was a last minute entry actually, confirmed just one week before competition day.  She missed some classes during our Adelaide holiday and on her ballet exam day. Thus, she was always in the "non-competition" group. Both groups learn the same routine, but I think there must have been more focus on the competition group. 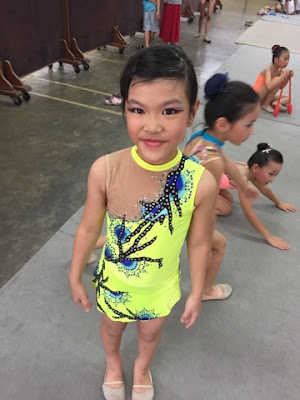 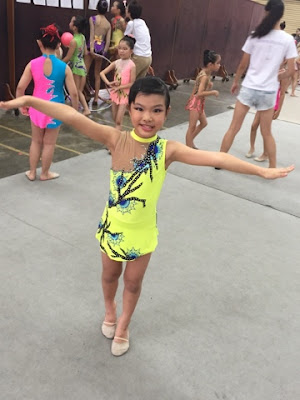 Warm Up/ Practice Session
During the actual competition, it's 2 girls at a time. 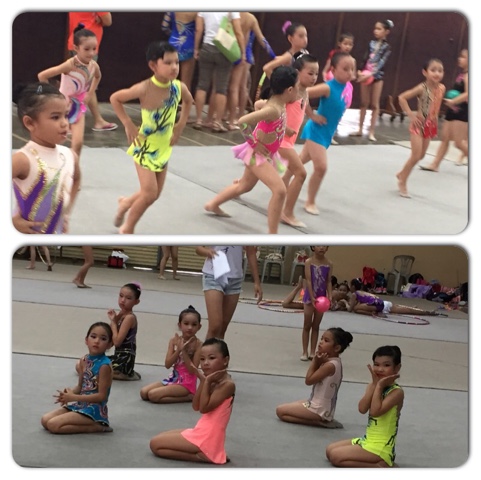 Alas, despite practicing hard daily for that one week after her participation was known, she forgot her routine halfway.  :-(     I cringed when her partner turned and ran back (part of the routine) but she stood fixed at her spot, waiting for the music cue.  I signalled for her to run back. She saw and turned and ran, but it was too late and unfortunately a very obvious mistake.  She managed to recover and finish up her routine though.
Results came out shortly after that and she got last place. 12 out of 12.  *sigh*
Back home, poor girl cried and cried. It was so so painful to watch. :-(
She wanted to quit gymnastics classes after that. Didn't help that one of her school classmate (who also took part)  kept teasing her for getting last place.
I was initially at a crossroad whether to let her quit or continue.  But then after thinking about it, I became quite adamant that she continues. Cos if she quits, the competition failure will always be in her mind and it will forever be a black mark. And more importantly, I didn't want her to see quitting as a solution to a problem. I waited for a week before bringing up the subject of gymnastics classes again. After a long negotiation process, we both came up with an agreement - she gets one packet of Super Ring junkfood if she continues classes for at least 2 months. And a butterfly ice-cream for Erin and herself for joining the competition. And that I walk her into the class. (sometimes I just drop her off)
She was super nervous on her first day of class after the competition!   But I was really relieved that when I picked her up, she was sweaty but all smiles, saying they got to use their ball that day.
About 2 months on, she's enjoying her gymnastics classes again. I am soooo glad that she didn't quit!  Yipee Yay Yay!  and Yay for Super Ring junkfood!  Oh, the girl who teased her for getting last place? (her initials are HCY)
Last week, Elyssa told me :  "Now I have 2 best friends in school. N and HCY!!!".
Posted by Adrine at 10:01 AM 4 comments: