Speech and Hearing Assessment for Erin

At 2 years 8 months old, Erin's speech development has been rather slow. She doesn’t really talk much but when she does, it comes out like this -

Thee Yan  (This One)

I want to Chleep (I want to Sleep)

Back chide (Back side)

I was still at a “wait-and-see” approach. Afterall, I’ve heard so many stories of little kids who started speaking late but had no problems picking up later.  But as usual, hubby got all panicky and kept pestering for a professional assessment.

So, 2 weeks ago I brought Erin for a Hearing and Speech Assessment at Sunway Medical Center.

First part was the Hearing Assessment (since speech delay could be due to hearing issues)  -  In the room, there was a simple toy. The type where you put in a marble and it goes round and round down a chute. The therapist let Erin play for a while, and then told her she could only drop the marble once she hears a sound. Initial sounds were quite loud and then it got softer and softer.  Erin passed this Hearing Assessment with flying colours.   This assessment lasted only about 15 minutes, including checking of ear pressure with a special equipment.

Second part was the Speech Assessment which took about 1 hour. The therapist asked her questions and played simple games with her. (like asking her to feed the bear cos it’s hungry, asking her to pass the yellow duck, put little cubes into a cup etc). She also took out some charts and asked Erin to name the items in the chart.

Later, Elyssa asked “Why this doctor just play and play with Erin only?”  hehehe. 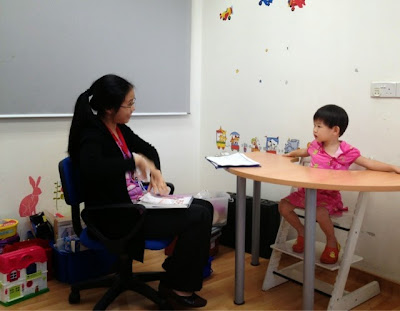 At the end of the assessment, the therapist said Erin’s speech progress was slow for her age. L   By now, her conversation should be comprehensible to a normal 3rd person. Not considered a severe case, but it is a sign to ring the alarm bells. She asked me to do some speech exercises with her like “KKkkhhhh, HHhhhhhh, Ghhhhhhhh” and to return for therapy sessions.  (since this session focused on assessment, not therapy). Next appointment set for 2 months’ time.

My thoughts – I am still hoping that she doesn’t need to go for therapy sessions. Just a few days ago, she said “one” correctly instead of “yan”. And she been speaking more and more too.  *fingers crossed*!
Posted by Adrine at 3:19 PM 12 comments:

After reading many times about homemade play dough, I finally tried it out last weekend.

1. In a pot, mix the ingredients.
2. Cook on a medium heat, stirring constantly for 3 minutes or until mixture pulls away from sides of pan.
3. Remove from heat; let cool for 1 minute and then knead. It should have a soft, smooth texture.
4. Play dough can be stored in airtight containers and will keep for several weeks 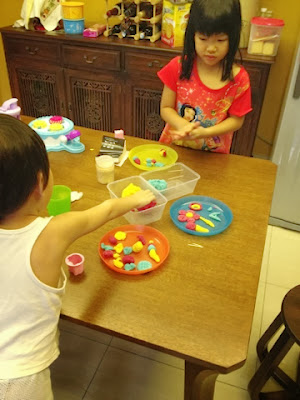 Elyssa wanted to show off her creations 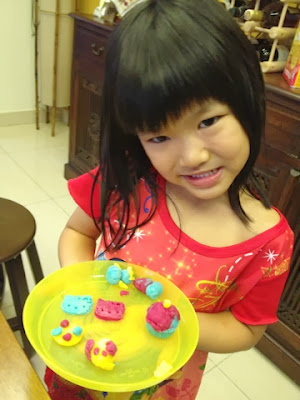 This little one too!
So what if it's just bits and pieces of playdough??? hehehe.
Super love her expression here  :-) 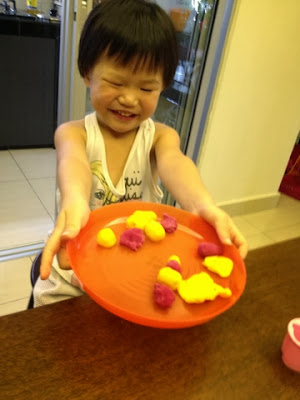 After the session, I just plopped the playdough into a covered plastic container and placed it in the fridge.

The very next day, they requested for another playdough session after I came back from work. No complaints from me! Told them they could only play after dinner, after bathing and after changing to PJs.   They got everything done super fast  :-)


Elyssa with her creations 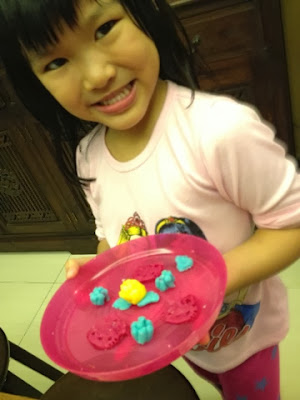 Really happy with this homemade playdough. Easy to make, easy to handle, cheap, toxin-free and no "rubber" smell !
Posted by Adrine at 2:47 PM 5 comments:

Erin is definitely in the Terrible Two's phase!  When, oh when is it going to end?

She gets into a tantrum practically every single day. The lie-down-on-the-floor, kick and scream type of tantrum. *sigh*.

Source of the tantrum varies, but basically it happens whenever she doesn't get what she wants or when she's asked to do something she doesn't want to do.

We've tried various responses - distracting/smacking/scolding/ignoring/reasoning.  (ok I admit, sometimes, when I feel like I'm reaching boiling point, I hand her to the maid and I go upstairs to cool down)

But then, when she's all fine and dandy....she's so smiley and behaves like a sweet little princess. 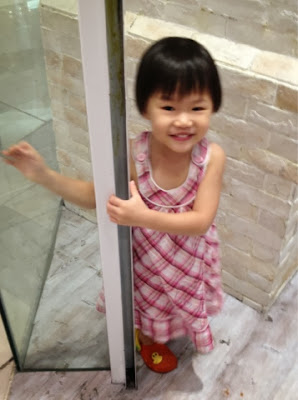