I love tip-sharing in Facebook and Whatsapp groups!  Did this for Elyssa recently :-


Colour Coded Books according to Timetable 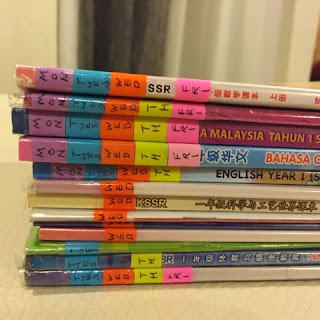 Makes book-packing a breeze!  Why didn't I know this when I was in school last time?? I explained to Elyssa how it works and told her she is responsible for packing her own books  :-)    (ok lar....i'll still monitor at the beginning)
So far so good for Elyssa in government school.  Her class teacher has created a whatsapp group for all the parents in her class. Super, super love it!  So far, the teacher has been very active in answering all sorts of question from parents - need to fill up what form, which books to bring, confirmation of names for name tag, what to wear since since sports t-shirt still not ready etc etc.
Such a dedicated teacher!!  I know it's too early to do a dance of joy, but I am really glad Elyssa got this teacher as her class teacher. She's stern enough in class (which is essential cos the class is pretty big) but also gives out mini chocolates (ok, could be one-off)  and stars (there's a star chart for each student) for good behaviour/performance.
I've heard so many horror stories about chinese school, but I somehow have a good feeling that Elyssa will survive well in Standard 1.  *touchwood*  *fingers crossed!*
﻿
Posted by Adrine at 3:13 PM 6 comments:

Mentally, I somehow couldn't "start" my year 2015 until my girls start school. Afterall, school was supposed to start on Jan 5th.  Then Elyssa's primary school term got pushed back one week due to floods in east coast. Ok, fine. (had to change my leave plans tho)
Erin's kindy was still scheduled to start on 5th. But on the afternoon of the 4th, I received a call from the school principal that school term will be pushed back to the 12th. Grr! Had to change my leave plans again.


Elyssa in her primary school uniform
(my Elyssa is in Std 1 already?????  *sobs*)
I woke her up at 6am, thinking she may need about 5-10 minutes to actually get up. But surprisingly, she practically jumped out of bed when I called her. I'm pretty sure it's first day of school excitement, but I do hope that it sets the right tone for all her upcoming school days. 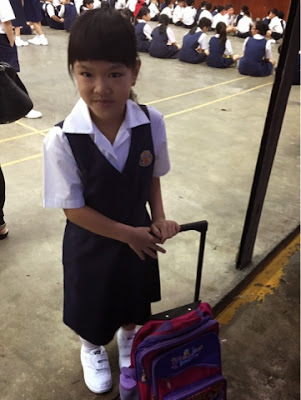 Assembly at the school hall
All speeches were in Mandarin. I don't think she understood most of it. *gulp*
She's not the only kid with banana parents (but thankfully, she has non-banana grandparents) so gotta have faith that she'll survive! 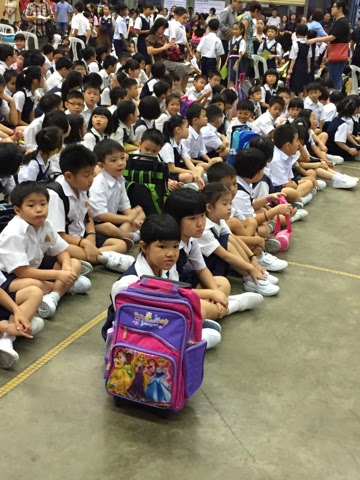 Before assembly ended, I had to rush home for Round 2 that morning. Hubby stayed on at Elyssa's school with her.

Erin in her kindy uniform
(my baby Erin is in kindy already??  double *sobs*) 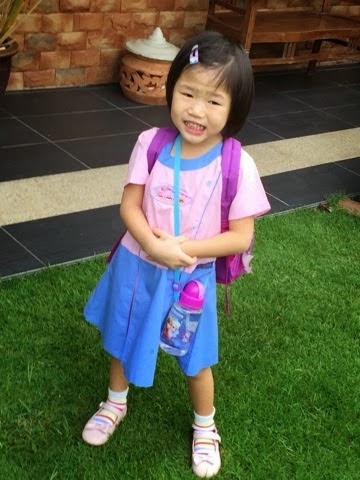 Erin's classroom
I stayed with Erin throughout her class. No tears and no drama. I got a little worried when some of her classmates started crying for their parents.  But Erin was steady all the way.  So proud of her! 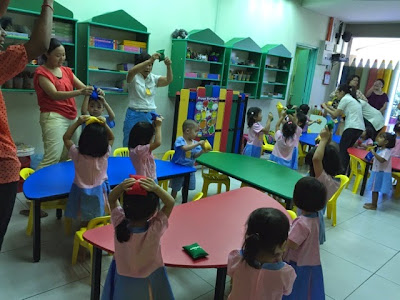 After Erin's class ended (early dismissal for day 1), I drove back to Elyssa's school. Peeked into her classroom and saw her seated right at the back. Sigh, but the class teacher will change seating position anyway.

We hung around until her class ended.  Took this photo after class:

Elyssa pulling her bag with 1 hand and holding on tight to Erin with another hand. Awwwww......... super, super sweet! 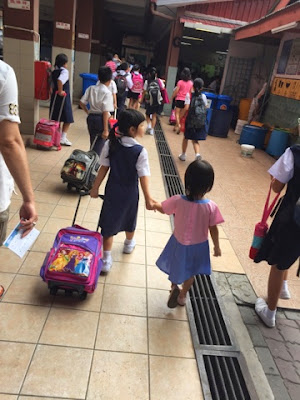